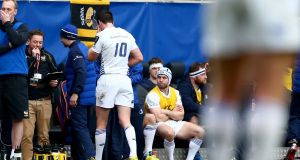 Johnny Sexton leaves the field after suffering a head injury in the match with Wasps: the Leinster and Ireland outhalf suffered four concussions in 2014. Photograph: James Crombie/Inpho

Johnny Sexton did not fail the Head Injury Assessment (HIA) he underwent on Saturday at the Rioch Arena.

The Leinster outhalf also passed the HIA he took on arrival at Ireland camp in Carton House yesterday. A third HIA will take place today before he can resume full training.

Marty Moore, however, has been ruled out of the Six Nations with a grade two hamstring tear – suffered in a not dissimilar manner to how Paul O’Connell’s Ireland career was seemingly ended – on the same day the Dubliner’s move to Wasps was confirmed.

Bealham, who can also play loosehead, has been a regular for Connacht this season. Based in Ireland for five years, he previously played for Belfast Harlequins and the Ireland under-20s and qualifies via a Fermanagh grandmother.

But it was the Sexton situation that needed clarification at Leo Cullen’s media briefing yesterday in the aftermath of Leinster’s record 51-10 defeat to Wasps on Saturday. The Ireland outhalf sustained an injury following a clash of heads with former team-mate Brendan Macken after just eight minutes. Despite Cullen saying Sexton failed the HIA, the 30-year- old does not, in fact, need to undergo return to play protocols.

But, presumably due to the four concussions Sexton sustained in 2014 – which included a collision with Mathieu Bastareaud – the Irish medical team are being vigilant about the health of the country’s most prized rugby player.

Cullen said Sexton could have returned to the field against Wasps but Dr Jim McShane and physio Garreth Farrell erred on the side of caution.

“He went off and did his HIA, passed the questionnaire, but the medics weren’t fully happy,” Cullen said. “That’s why he didn’t return to the field.”

Elaboration was sought from Cullen regarding this latest concern about Sexton’s well-being with the Leinster coach confirming the player has been concussion-free since neurologist Dr Jean-François Cherman took him out of action for 12 weeks in late 2014.

“I know there was a bit of hysteria around this but [Sexton] is being managed as best as possible. He clashed heads so he had slight inflammation on the side of his head.”

Cullen understands the levels of concern that have followed this incident, considering the spectre of concussion in rugby and chronic traumatic encephalopathy (CTE) across contact sports.

“Absolutely. We’ve had players this season, Seán O’Brien had slightly different symptoms than what other players had so, again, he got treated for his issues. He is still continuing on with that rehab.”

O’Brien had a concussion-related inner ear problem but has returned to the field in recent weeks.

McLaughlin, the 31-year-old Ireland flanker and recently confirmed Leinster captain for this season, was forced to retire last September after a number of head traumas of this nature.

“Kev was very different [to Sexton] in that he was having that episode that even with the slightest bang he was feeling that sensation,” Cullen said. “Of course it’s a very big concern.”

Leinster are without up to 35 players – including captain Isa Nacewa following knee surgery – for Friday’s Pro 12 game against the Dragons at Rodney Parade.

Graham Burke’s strike from halfway caps Shamrock Rovers’ fine night out 22:05
Lions squad set to have a greater spread than four years ago 22:00
Warren Gatland hopeful that Lions itinerary will be finalised this week 22:00
Blackmore back among the winners at Fairyhouse 22:00
Elite athletes still required to undergo 10-day mandatory quarantine 20:32
Crossword Get access to over 6,000 interactive crosswords