JJ Hanrahan: ‘You have got to be able to get back on the horse’ 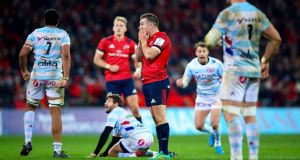 JJ Hanrahan said he can’t dwell on missing the drop goal which would have snatched victory last time out in the Heineken Champions Cup against Racing 92, even if landing it was the sort of thing he grew up dreaming of doing.

His magnificent conversion of Andrew Conway’s try secured a 21-21 draw with the Parisians but he knows the chance of repeating the sort of glory Ronan O’Gara snatched so many times in the competition for them eluded him.

“Obviously, I was massively disappointed. You can’t tiptoe around it. Of course, you are disappointed if you get that opportunity as a number 10. That’s what you pride yourself on,” said the Kerry native as he prepared for Saturday’s sold-out clash against European champions Saracens at Thomond Park.

“As a younger child growing up you always want those winning opportunities. But the thing about rugby and the thing about life in general is if one opportunity is going to hamper you for the rest of your life then you are going to fail pretty quickly.

“You have got to be able to get back on the horse. I came back in Monday morning and went on to Edinburgh. It is obviously a disappointing thing. You get back to training, go through your processes and you start repping it again, the next time an opportunity comes you don’t shy away for it and you go for it again,” said the Kerry native.

So, would he do anything differently if the opportunity arose again, he was asked at Munster’s press conference in Limerick on Tuesday? “Kick it over,” was the response.

“You have to commit to every kick and I probably didn’t do that.”

Hanrahan’s first successful kick on Saturday will take him pass the 500 points mark for Munster since he made his debut against Dragons in 2012, with two seasons away with Northampton Saints in between.

He knows that failure to win a second home game in the Heineken Champions Cup is going to make it almost impossible to advance to the knockout stages, so there is little billing required for the visit of the holders for one of those Saturday evening games at Thomond Park that Munster thrive on.

“We have got to focus on the here and now and that starts this weekend. That’s all that matters.”

Hanrahan knows how hard it can be to make the breakthrough and he was quick to have a word with 20-year-old Ben Healy on Friday night after the Tipperary native endured a nightmare start against Edinburgh.

“Ben is the same as any number 10,you want everything to go right. We are kind of perfectionists. You realise as you get older that the game isn’t perfect and there are always going to be mistakes.

“I just had a quick word with him afterwards, and just said the most important thing for Ben is how he walks in on Monday morning. You can either be defined by a silly – it wasn’t even a mistake – it was more a poor pass from Nick [McCarthy] and Nick knows that as well. We had a joke about that as well in the changing room after.

“If you get caught up in these things it will affect your other opportunities going forward. I know because I’d get caught up in that mistake when I was younger as well. For Ben he is a confident young lad, he’ll bounce back from it real quick. He has plenty of qualities.”

Meanwhile, Munster head coach Johann van Graan said that Tyler Bleyendaal’s latest neck injury is a concern as the New Zealander tries to deal with another spell on the sideline.

Van Graan confirmed that it is a new injury and not related to the two neck injuries which forced him to have surgery in 2014 and in 2018.

“I would lie if I said it wasn’t a worry,” admitted Van Graan when asked how concerned he was about Bleyendaal’s latest set-back.

“It’s a new injury so it’s not the same as before. He had some stiffness two weeks ago and we kind of let it settle over the weekend, and it didn’t, and our medical team investigated further and we sent him for an opinion.

“There’s a fresh injury to his neck, we’re just going to give him all the time that he needs.

“Now, there’s a life after rugby as well and for me that’s the most important, what happens after this, and we’re true to that way.”

Van Graan reiterated that he hopes to have Joey Carbery available by the end of the month, without putting a target on it.

“End of the month, I’ll stick to that, hopefully sooner . . . if it was up to me it would be this week but look, he’s progressing really well and like I said before, we’ll make sure that he’s 100 per cent right once we put him on the field.

“He had his boots on, he was in the field yesterday with the medical team, doing a bit of running, but he hasn’t done anything with the team yet.”

Mason Jones not interested in being the Welsh Conor McGregor 12:01
Charles Byrnes’ licence withdrawn after runner ‘nobbled’ with a sedative 11:38
JP McManus Pro-Am deferred for a year due to Covid 10:45
James Harden stars as Brooklyn Nets edge Bucks in thriller 09:17
Spanish player says Australian Open quarantine is like prison 09:06
Crossword Get access to over 6,000 interactive crosswords