Connacht’s big players must rise to clash with Gloucester 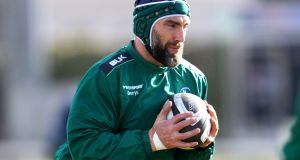 Connacht captain John Muldoon: he has been rested for the Gloucester match. Photograph: Bryan Keane/Inpho

Champions Cup rugby is on the line for Connacht when they host Gloucester in Saturday’s Challenge Cup quarter-final at the Galway Sportsground (1pm).

A win for Kieran Keane’s side could ensure qualification if the other semi-finalists have already gained access to the Champions Cup through their domestic leagues – a high incentive for Connacht to deliver a performance that would see off David Humphreys’ side for the first time.

History is not on Connacht’s side in theses duels – Gloucester having prevailed on all four occasions – but only just. The last time the premiership side came out 40-32 winners in a Champions Cup play-off after extra time was in the Pat Lam era. This game could be the occasion for Connacht to buck that trend if they can produce the necessary “one-off” performance of their lives.

“I think we are good enough to go to Champions Cup,” Keane says,” but the thing about sport is that it is on the day.”

Keane, having witnessed a somewhat inconsistent season of performances or “growing pains” since taking over the coaching reins this season, will need all his big players to perform. In that regard the return of Grand Slam heroes Bundee Aki and Kieran Marmion is a big plus, while captain John Muldoon has been deliberately rested for this occasion.

“They are not going to be intimidated by anyone,” says Keane, and “that is a blessing”.

Gloucester, however, have their eyes not just on Champions Cup qualification – they sit in a comfortable sixth place – but also on a trophy, and David Humphreys’ squad is full of experienced players such as John Afoa, fullback Jason Woodwood, Tom Marshall, scrumhalf Will Heinz, and lock Jeremy Thrush.

Ross Moriarty has been recalled to the back row – one of six changes to the starting line-up against London Irish last weekend – while Wales international Owen Williams has been recalled for his first outing since their final pool game.

And there are similarities between the two sides – their record on the road is not the best this season, but they are physical up front and have pace out wide.

“They have some big name players who they rely on I suspect, and they have also had an indifferent season, high and lows like us, but you can’t hide the fact that challenges are still there, but it is exciting too,” says Keane

Connacht have produced some super performances of late, if not getting the deserved result. If they are in front heading into the final quarter they will need to find a disciplined way to take advantage of the largest home crowd in the Sportsground to repel an expected late Gloucester charge and avoid another last-minute heartbreak.