Malakai Fekitoa unfazed by the prospect of Thomond Park 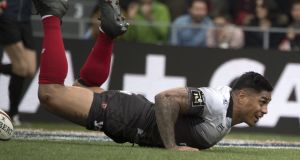 Toulon’s Malakai Fekitoa celebrates after scoring a try during the 49-0 win over Clermont in the French Top 14 clash at The Mayol Stadium in Toulon. Photograph: Bertrand Langlois/AFP

Never tell an All Black that an Irish player is better than another All Black. Never suggest a New Zealand rugby player should deny his culture of ‘second best sucks’.

Never challenge the natural disposition of an All Black, his rugby genetic material or his conviction that the idealised vision of perfection always wears a black shirt with silver fern.

So what about Conor Murray then.

“It will be tough for us against him because he is one of the best there is in the world,” says the Toulon centre and for the time being former All Black, Malakai Fekitoa. “Along with the likes of Aaron Smith, ” he adds.

Even the name of a 2015 World Cup winner can be lost among the gold filigree that decorates the list of international players on the Toulon team sheet.

In his first European competition, Fekitoa is new to the emotion of it all and in a coldly professional way detached from the ghosts of champion teams laid to rest in Thomond Park.

It was Fekitoa who went high on Simon Zebo in the return Dublin match following Ireland’s first ever defeat of New Zealand in Chicago 2016. It was also the centre who scored an early try from a Beaudan Barrett cross field kick and added a second as the All Blacks reasserted world order at Lansdowne Road.

He has done hostile environments before. The idea of a cauldron, something that to a weaker mind could be mentally injurious, leaves him cold. Much as Limerick would have it otherwise, Thomond Park is no different.

“For myself, every time I get on the field I still want to be the best there is,” he says. “Ever since I left New Zealand, my mindset has changed in terms of whatever role I’m given. I have to give 100 per cent if I’m on the bench or starting.”

Today history escapes him. Munster and the All Blacks doesn’t appear to be part of Tongan folklore.

“Emm . . . yeah, look,” he says exhaling hard. “I hadn’t heard much about Munster. I haven’t played there, actually. I think I watched that game when I was younger.”

A replay perhaps as it was 15 years before Fekitoa was born. He is historically baggage-free, nor has he concerned himself with the injury worries of Munster coach Johann van Graan.

“No, really I haven’t looked at the team and thought of who played,” he says. “Since I moved here, teams don’t really look at who is playing. At home, we look at individuals and we plan for the week.

“But here, it’s focusing on ourselves mentally and physically, how we prepare for the match, how we plan as a team. We focus here more on Toulon.

“I don’t think it [Munster injuries] will have an effect on us. I don’t think we look at it that way. We just make sure we are ready ourselves.”

Fekitoa was once being groomed for a seamless transition into the centre position Conrad Smith filled in the All Blacks. That was 2014.

But four years later other names had filed through. Anton Linert-Brown, Ngani Laumape, Ryan Crotty and Jack Goodhue all paid their respects. Fekitoa hasn’t given up and realises chasing the dream remains in New Zealand, chasing the cream in Europe.

Toulon have him on borrowed time.

“Even though I left New Zealand, I will return one day and chase the dream,” he says.

It is big European games and teams like Munster can enhance prospects for any future return. In that space, the mood this week is buoyant. A 49-0 win over Clermont would ensure that. But the scoreline was an outlier and it says more about Clermont than Toulon. Still.

“Last weekend, we’ve been working a lot about the little things and doing our job well. It starts from the forwards and I think it showed that everything we planned and worked for, it worked.

“I guess it will be a different beast this weekend. I think Munster will be a lot better defensively and in offence as well. They have some experienced players and their nine and 10 are very smart. They have great boots and clear vision and it’s tough when teams have that.”

In recent weeks, he says, there has been a change in attitude among the Toulon heavyweights. They have developed a prowling sense of menace just two games out from a final. Their instincts are sharp to the thinking that taking down Munster would fatten their chances of glory. For that they are stirring.

“I have just got here, obviously,” he says. “But over the last couple of weeks it has been a lot better at training. The team are working hard, compared to when I first arrived. I think that is a good sign.”

A team of high-achievers. A team believing in their ability. A team fearful of no Irish ground. A perfect fit for Thomond Park.