Only Munster's best will do against Toulon's galacticos 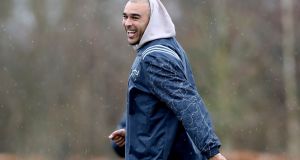 Simon Zebo: returns from injury for what will be his farewell European game for Munster at Thomond Park. Photograph: Bryan Keane/Inpho

A monumental weekend for the Irish provinces and if it’s quarter-final time then Munster must be among the cast list, and most probably at their Limerick fortress. Somehow it wouldn’t be the same otherwise and so it has come to pass.

The heavy spending, heavyweight three-time champions Toulon come calling for Munster’s record 17th appearance in the last eight, and a 10th home quarter-final, to give the tie a fitting sense of occasion.

It also appears an altogether tougher ask for Munster than it did when the quarter-final line-up was confirmed back in January. Munster effectively haven’t played together since, albeit they welcome back Simon Zebo and Andrew Conway from injury, as well as Stephen Archer and their Grand Slam winners, Conor Murray, Peter O’Mahony and CJ Stander.

With the midfield cupboard fairly bare, Rory Scannell has also been passed fit after completing his return to play protocols. Yet Munster look slightly patchwork.

Until this week, Conway had been sidelined since January, and Zebo’s preparations may have been hampered for what will be a farewell European game at Thomond Park. Similarly, Scannell can’t have trained fully all week.

In the absence of a specialist openside Jack O’Donoghue shifts from the blindside, although he has, admittedly, played 14 of his 51 Munster starts there. The last of them was against Glasgow over a year ago, but he’s a strong, athletic player, and looks the right fit for this.

Toulon’s starting line-up looks imposing. Ma’a Nonu is restored alongside Mathieu Bastareaud – busting tackles and offloading better than ever, with the free-scoring Chris Asthon running his trailers from full-back – and ditto Francois Trinh-Duc at outhalf.

Up front, French captain Guilhem Guirado, and the South African pair of lock Juandre Kruger and number eight Duane Vermeulen, are restored, with Raphael Lakafia moving to No ‘6’ in the absence of the injured Juan Fernandez-Lobbe. Their bench is pretty beefy too, but then so too is Munster’s.

Whereas Munster qualified as third seeds with some aplomb, Toulon muddled through the pool stages, kick-started by last-ditch, one-point wins over the Scarlets and Benetton. But since qualifying they’ve won five of their last seven domestically to rise to fourth in the Top 14. That comprised of four thumping home wins, the most recent being that 49-0 thrashing of a disinterested Clermont last Sunday, as well as an impressive 27-20 win away to La Rochelle.

Although that was one of only three away wins in 14 competitive away games this season, you sense that their seasoned galacticos won’t be fazed by the Thomond Park factor as were Toulouse three years ago and last season when shipping 40-plus points.

Akin to Leinster at the Aviva Stadium tomorrow, in all probability Munster won’t be granted the same freedom to impose themselves here, and will have to work harder for everything they get. By the same token though, Toulon’s sun-kissed romp at home to Clermont will not have remotely readied them for what awaits here.

There’ll be no avoiding the physical challenge which Toulon’s array of big carriers will bring, and Munster will also have to use their fitness and move the Toulon juggernaut around.

The Red Army will be at fever pitch, and that will just be for the warm-up, and the scoreboard after 20 minutes will tell a tale in itself. The presence of Nigel Owens should ensure a well patrolled game. Munster have had issues with their penalty counts, but their greater familiarity ought to help. There’ll be big moments and momentum shifts, and Munster could have an edge in deciding the tempo and field position at half-back.

Most of all their line speed and tackle execution will have to stop Toulon building momentum. Therein lies the key. Munster will need their best performance of the season, but these occasions tend to produce exactly that.

Toulon’s galaxy of star turns appear to add up to more, but then with Munster the collective often adds up to more than the individual parts.