Chris Henry says Ulster can bounce back against Toulon 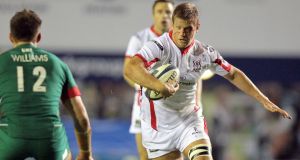 Ulster flanker Chris Henry admits the side are hurting after their seven-point European Champions Cup defeat to Leicester Tigers at Welford Road on Saturday, but can bounce back against Toulon this week.

A combination of sloppy Ulster play and ruthless finishing from Leicester led to the homeside racing into a 19-3 lead at the weekend, before Neil Doak’s side fought back after the break to take a losing bonus point with tries from Tommy Bowe and Franco van der Merwe.

“Everyone’s pretty hurt to be honest,” said Henry today. “We went there with a lot of confidence and we thought if we played well we’d get a result but unfortunately certain aspects of our game weren’t up to scratch. But credit to Leicester, they took it to us and finished off some good tries.

“Our lineout didn’t function at crucial times through a combination of bad lifts, jumps and throws. Our discipline again was poor and it’s frustrating for us because it’s all things that we can control. The discipline aspect is something we’ve talked about and unfortunately, still, in the heat of battle people are making silly mistakes.”

There were positives to be taken from the second half recovery, Henry insists, and that “losing bonus point could prove vital”.

“We’re annoyed and hurt from last week but it’s about putting that behind us and getting a buzz going again for Saturday.”

The visit of the defending champions to Ravenhill, however, will not be the easiest game in which to put things right but Henry hopes the home crowd can lift Ulster to the next level.

“They’ve won the competition two years in a row and they’re a quality team but I’ve no doubt we’re going to turn up and put in a serious performance. When we’re on the money we can put any team away. The atmosphere at the Glasgow game two weeks ago was incredible and I think it’s going to be a step up from that again this weekend. That will give us a huge lift as well.”