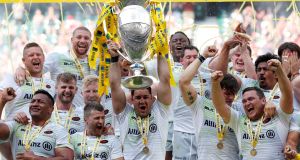 English champions Saracens are one of 13 clubs to receive £18 million from the deal.

Premiership Rugby has completed a deal thought to be worth around £230 million (€255 million) with the private equity firm CVC Capital Partners and has moved to ease concerns the windfall will be splurged on player wages.

The 12 Premiership clubs, as well as the Championship leaders London Irish, will each receive around £18 million (€20 million) from the deal, having agreed to sell CVC a 27 per cent stake.

The deal was finalised on Wednesday after the clubs failed to reach an agreement at a previous board meeting. The initial approach from CVC, which made £8 billion from its ownership of Formula One, was £275 million for a majority stake but the clubs voted against ceding control in September.

While some clubs such as Bath and Saracens are likely to use the windfall for stadium redevelopments, there are concerns other clubs will look to strengthen their squads and thereby inflate rapidly growing wages.

Premiership Rugby hopes such short-termism will be avoided with the £7 million salary cap to remain for at least the next two years and has urged the clubs to invest in “operations and infrastructure” having made a collective loss of £28.5 million last year.

“We have a salary cap in place and that’s not moving for the next couple of years,” said the Premiership Rugby chief executive, Mark McCafferty. “We are investing in operations and infrastructure, that’s the key. We will be able to invest at a greater level and build the competition out further.”

CVC is expected to focus its attentions on Premiership Rugby’s commercial activities. Income from sponsorship and broadcasting is expected to rise significantly as a result. The clubs will be better off in the long run only if their income from central funds rises significantly more than the 27 per cent stake acquired by CVC.

Premiership Rugby also eased fears over what happens when CVC decides to sell up. “They are expecting to be in this for the long term and they understand what’s required to invest and build,” McCafferty said. “I expect Premiership Rugby in seven or eight years’ time to be an even more globally followed business. That expansion needs support.”

The Premiership Rugby chairman, Ian Ritchie, also denied the deal will affect the £220 million Professional Game Agreement with the Rugby Football Union, which governs player release. Ritchie, who brokered the deal in 2016 when he was the RFU chief executive, described CVC’s investment as “complementary” rather than being a competitor.

Danny Cipriani’s hopes of an England recall for the Six Nations have been significantly dented after Gloucester confirmed he would be sidelined for up to six weeks with a chest muscle injury. Cipriani was withdrawn during Gloucester’s Champions Cup defeat by Exeter last Friday after the fly-half suffered a torn pectoral muscle. England’s first Six Nations match is away to Ireland six weeks on Saturday with Eddie Jones expected to name his squad on January 16th.

1 Andy Farrell recalls 13 players to Ireland squad ahead of England clash
2 Tipping Point: Eddie Jones’s rhetoric is out of place in a febrile political climate
3 All in the Game: No Moore medals for Steven Gerrard
4 Leaving Cert prep forces Beibhinn Parsons out of rest of Six Nations
5 On healing and wild hurling: The re-education of Diarmuid Lyng
Real news has value SUBSCRIBE

Rory McIlroy heads for Mexico with ‘WGC slam’ in sight 16:58
Tiger Roll still on track for Aintree after placing fifth in Boyne Hurdle 16:17
Andy Farrell recalls 13 players to Ireland squad ahead of England clash 15:11
Leaving Cert prep forces Beibhinn Parsons out of rest of Six Nations 15:01
Kieren Westwood: ‘I feel obliged to clear my name and defend myself’ 14:01
Here is your handy guide to sport on television this week