‘They’re a country of three million people. There seems to be some sort of thing there’ 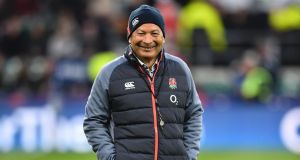 Eddie Jones has added extra spice to Saturday’s match in Cardiff by suggesting England should always beat a country the size of Wales. The Australian said he cannot understand why England have won only 40 per cent of their championship games on Welsh soil and wants to improve that “horrendous” ratio at the Principality Stadium.

With both sides having kicked off the 2017 Six Nations with victories on the first weekend, Jones has been studying the historical stats and is baffled by his findings. “I can’t work out why the record of England in Wales is so poor,” said the head coach. “I’m sure they have [had good teams in the past] but they are a country of three million people. There seems to be some sort of thing there. No one can tell me why the English are petrified of playing Wales in Wales. I will talk to a few blokes to figure out what the problem is and why the record is so horrendous, because it is horrendous.”

England triumphed 21-16 on their last visit to Cardiff under Stuart Lancaster but their 30-3 hammering in 2013 was the fourth defeat they had suffered across the Severn Bridge since 2005. Previous regimes have arranged for Welsh hymns to blast from speakers beside the training pitch in the build-up and Jones is joking about inviting Tom Jones into camp - “Possibly, yeah ? I used to like him when I was young” - to put his players in the mood.

Wales’s 33-7 success over Italy in Rome has also raised the stakes, with the hosts’ hoping England will agree to the Principality Stadium roof being closed. As things stand, Jones is not overly bothered.

“I don’t care. They can have fireworks going off, it doesn’t matter. It’s the same for both teams,” he said. “The louder and more rowdy, the better it is. Those are the games you want to win. Are they closing [THE ROOF]? We’ll toss a coin and see what happens.”

“You have to be able to cope with it. What happens in a World Cup final if you don’t like the atmosphere? That is what Test rugby is about and that is the fun part of it. We have to find a way to overcome that. But it is not going to be overcome by repeating history. We will work out what has been done in the past and make sure we don’t do it. I have a solution for it but I am not prepared to share it with you.”

Jones’s own last visit to Cardiff with Australia in 2005 ended in defeat - “It hasn’t got good memories for me so we’d better win there” - and he is hoping for firmer officiating at the scrum than in the France game. “Every time there was a scrum, there was a debate. It was like Parliament and watching Theresa May go against the other bloke,” he said.

England, meanwhile, have confirmed George Kruis is to undergo a knee operation on Tuesday and will be out until at least late April. But Mako Vunipola is still hoping to be fit for the latter half of the side’s Six Nations campaign.

Meanwhile Wales will hope that outhalf Dan Biggar and wing George North can shrug off knocks heading into next Saturday’s Cardiff showdown against England.

Biggar went off at half-time of Wales’ opener against Italy, while try-scorer North took an early blow to his thigh but stayed on and finished the game by claiming a long-range solo touchdown.

“Dan has taken a bump to his ribs, but we will wait for more medical information on that,” Wales interim head coach Rob Howley said.

“George took an early bump — he has a haematoma on his thigh. I am delighted he stayed on. I thought he showed some mental toughness, which is important in games when you come away from home.”

Number eight Taulupe Faletau (knee) and lock Luke Charteris (hand) both missed the Italy trip, and a clearer picture on the fitness situation should begin to emerge once Wales have met up again on Tuesday evening.