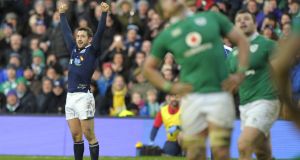 This was no way for the first team to beat New Zealand, Australia and South Africa in the same calendar year since 2003 to say a premature good bye to a shot at a Grand Slam. But then again the Six Nations’ uniqueness and its internecine rivalries once again put summer tours and November windows into perspective.

Ireland made a small bit of history at Murrayfield on Saturday, albeit the Six Nations’ first ever losing bonus point was not the kind they were looking for, and are now well and truly cornered. No less than under the traditional two-points-for-a-win, Ireland will assuredly now need four wins in their remaining four games, and most probably laced with some four-try bonus points along the way.

That is the bottom line after Saturday’s hugely disappointing 27-22 defeat and anti-climactic reality check against Scotland at Murrayfield. Ireland have no room for error, beginning next Saturday in Rome’s Stadio Olimpico, where on Sunday Wales recovered from a 7-3 interval deficit in Conor O’Shea’s first Six Nations game to win 33-7, but left a bonus point behind with the last play of the game.

Ireland, with one point, still have another 20 points to play for, as opposed to being on zero with eight to play for, but a disconsolate Joe Schmidt was not of a mind to think that the door was any more ajar toward recovering from an opening defeat to win the title, as Wales did four years ago.

“Not necessarily,” said Schmidt, who cited their five-point losing margin before adding: “On the back of that five-point differential, if you can build some good scores through the championship you would normally get back into the mix. Now it is the same anyway. The tough thing is that it will be tough again next week and we can’t afford to chase anything other than the win, first and foremost, because of the position we have put ourselves in.

“So that immediately makes it a little more complicated. If we manage to go through the rest of the championship and win those games, I will still take a fierce bit of pride in this team to bounce back from today and that is the challenge that is there for them. The one thing I will say in favour of these players is that they tend to rise to challenges. And they have demonstrated that a few times in recent history.”

The scope for change is limited, with Donnacha Ryan likelier than Peter O’Mahony and Johnny Sexton to come back into the mix from their list of casualties. Ryan’s return would assuredly help a lineout which coughed  up three close-range throws – one in the air and two on the ground.

“Certainly Donnacha Ryan should be right,” ventured Schmidt. “I am not sure about Johnny or Pete, so I will have a look at that on Monday or Tuesday and we will have a bit of a clearer picture hopefully.”

There is also sufficient credit in the bank from the autumn and before to reduce the inclination toward significant changes – not to mention a relative lack of options.

“We will look at the footage and make some decisions beyond that,” said Schmidt, before adding significantly: “But I don’t think there is going to be too many knee-jerk reactions. These players have worked really hard to get to the position of being selected in the first place and so you don’t suddenly turn around and throw someone else into the mire.

“They feel that we are in this position and I am pretty sure that they will be pretty keen to fight their way out of this position.”

The pain of Saturday will be a spur. Describing the away dressing-room as “pretty solemn”, Schmidt added: “There is a real disappointment there. When you climb the mountain to get back up – you’re 21-5 down and you get 22-21 ahead – a fair bit of hard work has gone into that and I think we deserved the lead too. They really did claw their way back in really positively and then to let that slip, there’s massive disappointment. But we’re just at the start of the championship; you can’t afford to let that linger for too long, although I think it’s not a bad thing to let it linger a little bit.”

The tardiness of the Irish squad’s arrival by bus, no more than “five to 10 minutes” admitted Schmidt later, was hardly the primary factor in the sluggishness of their start. Even then, Ireland scored 17 unanswered points to take a one-point lead, but couldn’t close it out.

“We weren’t as accurate as we needed to be,” said Schmidt, in explaining the failure to do so. “You can look back and see the line breaks, and we didn’t finish in behind them,” he added, in reference to the 12-6 tally of line breaks in Ireland’s favour.

“We had territory and possession in the first half and they had the score, but at the same time, some of our possession was very slow. And some of the possession you really want is from those positions in the 22, and I think we turned two or three of those over. So it was just too easy for them to sort of come back and attack at us.”

There’ll be some angry reviews and training sessions in the Carton House this week.