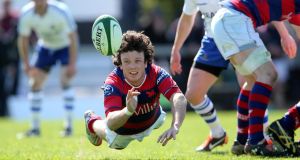 Clontarf’s Sam Cronin gets his pass away at Temple Hill. Photo: Ryan Byrne/Inpho

Cork Constitution’s enviable cup pedigree shone through once again as they won the Ulster Bank Bateman Cup for the third successive year with a 24-9 victory over Clontarf.

Three David Joyce penalties, in response to converted tries from Con back rowers Luke Cahill and James Ryan, kept Clontarf in touch at the break, trailing 14-9.

But with a strong wind behind them, Tierney’s men saw out the result thanks to a Darragh Lyons drop goal and Sweetnam’s 74th-minute touchdown. They were also helped by a tremendous individual performance from man-of-the-match Graeme Lawler, who excelled throughout in the forward exchanges.

The winning margin was surprising given that Constitution had lost their last four Ulster Bank League games and Clontarf are through to next weekend’s play-offs. However, with persistent lineout issues and a frustrating amount of turnovers, things never really clicked for ‘Tarf this afternoon.

Cork Con’s season may be over before they would have wanted it to be, but they break up for the summer with the Bateman Cup safely retained. Today’s success saw them become only the second club in the competition’s history to complete a three-in-a-row of title wins - Lansdowne were first to achieve the feat back in 1929-1931.