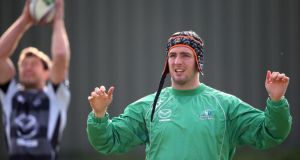 Dave McSharry: returns to the Connacht line-up for a first start in ten months.

Pat Lam might legitimately wonder when he’s due a change in fortune but he might also concede that Connacht need to be more creative in their patterns initially and ruthless laterally in exploiting opportunities; being difficult to beat guarantees nothing more tangible than frustration.

“Due to the upcoming autumn Tests we’ve made a few changes, which is an opportunity for a number of other players in the squad.”

First start
Dave McSharry returns to the Connacht team for a first start in 10 months. The 23-year -old will partner Darragh Leader (20) in the centre. The home side need to take a few more risks if they’re to get the best use out of Fionn Carr and Matt Healy on the wings.

Lam will he hoping nothing happens to Mata Fifita, Jake Heenan and George Naoupu as he is running out of backrow players. Mick Kearney is named among the replacements to provide cover.

“Once again, it’s been a disruptive week with more players being added to our ever-growing injury list. Losing Sean Henry, Andrew Browne, Aaron Conneely, and Danie Poolman to injury and Robbie Henshaw to Ireland camp has meant that we’ve had to dig deep as a group,” said Lam.

“On a positive note, it’s a big boost to have Jason (Harris Wright) and Nathan (White) back in the squad. We’ve been really pleased with the form of our props Rodney (Ah You) and Brett (Wilkinson) in the last number of weeks.”

The Warriors have a strong bench and it’s reasonable to assume they’ll manage a positive reaction to last week’s poor effort. They’re a tough side to get the ball back from and if Connacht persist in kicking as a primary attacking gambit it could be a long night. They need to embrace a more adventurous philosophy, sooner rather than later, otherwise their lot might not alter substantially.