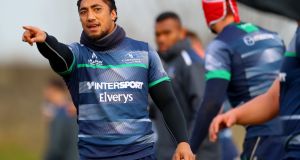 Bundee Aki: will relish the battle for Connacht at the Ricoh Arena. Photograph: James Crombie/Inpho

On TV: Live on Sky Sports.

It is a measure of the remarkable progress Connacht have made in the last three years that at this exact point in December 2012, in Pat Lam’s first campaign in charge, they went into their round three European Cup fixture on the back of nine defeats in 11 games, their sole successes coming against Zebre.

It’s also worth noting that the sequence culminated in a thrashing at Edinburgh and, perhaps most pertinently of all, a week later Connacht shredded the odds, the formguide and much else by winning away to Toulouse.

Granted Wasps are a more dynamic side than Toulouse were then, but Connacht are a considerably better outfit now as well.

Toulouse would gain ample revenge with a bonus point win the Sportsground a week later, so while conventional wisdom may have it that Connacht’s return game at home to Wasps in Galway next Saturday should offer a more favourable chance of upsetting the odds, who knows?

A similar theory probably held prior to Ireland facing the All Blacks in Chicago, with New Zealand in Dublin a fortnight later.

And conceivably Wasps could be more vulnerable on Sunday. At this point last year, they lost 25-23 at the Ricoh Arena against Bath, whereupon they went to the Rec a week later and thumped Bath by 36-10.

Buoyed by successive wins, with the talented and injury-free Nepia Fox-Matamua showing his form in tandem with Jake Heenan, Connacht are boosted by the return of Irish internationals Niyi Adeolokun, Kieran Marmion and Ultan Dillane, as well as out-half Jack Carty.

They face a Wasps unit littered with running threats, including the returning Christian Wade and featuring an injury-delayed debut for Kurtley Beale.

Bundee Aki has a tendency to revel in some big-game hunting, especially if directly confronted with a big name, and his duel with Beale should be a fascinating mini-battle within this back-to-back two-legged battle.

But the lines in the sand will be drawn up front, and Marty Moore will assuredly be of a mind to showcase his scrummaging, defending and poaching abilities against Irish opposition. Wasps also welcome back captain Joe Launchbury and Nathan Hughes.

It’s always a little more unnerving for a visiting side if the referee is French, as are the entire officiating team, and another concern is the respective place-kicking of the two outhalves. Jimmy Gopperth has landed nine from nine to date whereas Jack Carty’s ratio is 64 per cent.

This will be the sides’ first ever meeting, and it is a measure of the task facing Connacht that through all their highs and lows, and relocation from High Wycombe to Coventry, the two-time winners and 16-point favourites have never lost at home to Irish opposition in this competition, winning six and drawing one.

Leinster did beat Wasps at their old home of Adams Park in the quarter-finals of the Challenge Cup four seasons ago, by 48-28.

But far more relevant, of course, is that Wasps beat Leinster 33-6 and 51-10 en route to last season’s semi-final defeat by champions Saracens.

A 12-15,000 crowd at Sunday lunchtime ought not be too intimidating, and with the forecast set fair, this has the makings of a fluid encounter, albeit their figures have been inflated by running in a combined 20 tries against a Zebre defence that has had more holes than a soup strainer.

On foot of that thrashing in Edinburgh three years ago, Lam hardly slept that night, poring through Connacht’s defending and devising a new defensive system for the Toulouse game.

The squad brought in A4 notepads and pens for a Monday morning review which he likened to going back to school.

This will require more than defensive solidity, but once again Connacht will have a plan. Wasps are second in the Premiership and unbeaten at home in 2016, but may not encounter too many sides like Connacht, who are unlikely to kick the ball back to them and will instead keep it in hand and recycle possession.

Connacht will then need to fink chinks in the Wasps defence, for they will need tries to win this game. And their ambition may result in mistakes, so therefore another key will be their transition from attack to defence.

Anything less than a Wasps win would be astonishing, yet Connacht have more than a puncher’s chance.