Eddie Jones rings the changes for England’s tour of Argentina 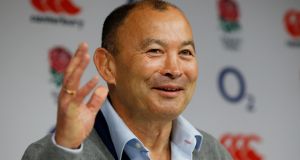 Eddie Jones: “We have focused particularly on youth because we want to find players who are going to be better than the 16 players going on the Lions tour.” Photograph: Paul Childs Livepic/Reuters

Those who thought England’s Lions-depleted squad to tour Argentina would be a largely predictable list do not know Eddie Jones very well.

Fifteen uncapped players will be heading to South America for two Tests in June with Sale’s cross-code wing Denny Solomona and Auckland’s Piers Francis among some eye-catching inclusions in a 31-man party.

Several of Jones’s picks are still in their teens. Sale’s 18-year-old twins Ben and Tom Curry are joined by two 19-year-olds in the Saracens’ lock Nick Isiekwe and the London Irish wing Joe Cokanasiga.

Of the 14 backs named, nine are uncapped at senior level with the former Castleford wing Solomona, the Northampton-bound fly-half/centre Francis and Maunder, who only made his Premiership debut in the autumn, all in line to feature in the matchday 23 under Dylan Hartley’s captaincy.

For those omitted from this England squad and the Lions equation, however, a period of introspection looms.

This, clearly, is all part of Jones’s strategy: he remains determined to re-energise all connected with English rugby with a view to unearthing “three or four” surprise contenders for his 2019 Rugby World Cup squad.

“We have focused particularly on youth because we want to find players who are going to be better than the 16 players going on the Lions tour,” said Jones. “To win the World Cup we need to have the best talent; that is our ultimate destiny.”

That will be scant consolation for, among others, Christian Wade, Tommy Taylor, Dan Robson, Mike Haley, Josh Beaumont, Don Armand, Marland Yarde, Semesa Rokoduguni, Teimana Harrison, Danny Cipriani and Mike Williams, all of whom would have regarded the Tests in San Juan (June 10th) and Santa Fe (June 17th) as a perfect opportunity to push their international credentials.

Jones, though, is adamant no one should assume anything, his senior players included.

“If they’re not keen to tour they won’t play for England again, it’s as simple as that,” he said.

1 Leinster look ready to step things up and burn off Saracens challenge
2 Born to ride, born to win: Sam Bennett, the making of a green machine
3 Will Connors now delivering on his massive potential
4 Keith Duggan: Surreal story of John Delaney needs to act as a wake-up call for FAI
5 Rory McIlroy battles to stay in the mix as Patrick Reed leads the US Open
Real news has value SUBSCRIBE