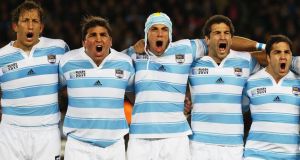 It means he misses the rest of the Rugby Championship and three matches for his English club Worcester Warriors from now until October 28.

Earlier in the day, team -mate Pablo Matera had been found not guilty of allegations of eye-gouging during the same match.

The pair had been cited after a feisty encounter in Mendoza, where South Africa squeezed out a 22-17 triumph.

A judicial hearing heard evidence from two doctors, the referee Steve Walsh and Senatore himself and decided he had bitten on the forearm of Etzebeth during the second half.

A reduced punishment was decided after judicial officer Terry Willis found Senatore had an unblemished record in 19 Tests for Argentina and that there had been provocation from Etzebeth.

“In the absence of any aggravating feature and significant mitigating factors, it was determined that a seven-match suspension was appropriate in the circumstance,” a SANZAR statement said.

The 20-year-old Matera was cited after accusations by Springbok flanker Francois Louw but the Argentinian was cleared.

Elsewhere, Israel Folau has re-signed with the Australian Rugby Union through 2015, rejecting offers to move back to rugby league as he targets a spot in the Wallabies squad at the next World Cup.

Folau, 24, scored three tries in five Tests for Australia in his debut season.

1 Farrell and O’Connell provide insight into changes in Ireland’s analysis
2 Sideline Cut: Vignette shows why Bird is the true shark in The Last Dance
3 Andrew Porter diary: Meat, veg and intermittent fasting the order of the day
4 Anfield and Cheltenham show sports again lacking in looking after their own
5 2019-20 FA Cup final rescheduled for August 1st
Real news has value SUBSCRIBE