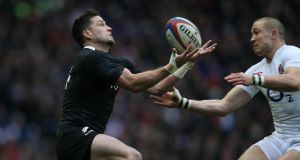 Consistency has been the buzzword for both the All Blacks and Wallabies ahead of their third and final Bledisloe Cup clash of 2013 in Dunedin tomorrow, with the world champions looking to maintain it and the Australians seeking it.

The All Blacks have already locked away the symbol of trans-Tasman supremacy following their two victories over the Wallabies in their unbeaten run through the Rugby Championship to retain the Southern Hemisphere title.

Despite that success, coach Steve Hansen resisted the temptation to make wholesale changes to his side for the game at Otago Regional Stadium.

Instead he shuffled outstanding winger Ben Smith into the vacant centre spot, reinstated Cory Jane after a long injury lay-off and gave lock Jeremy Thrush a chance to book a ticket on their end-of-season tour.

Wallabies coach Ewen McKenzie, who replaced Robbie Deans in July, has had a troubled introduction to international coaching, winning just two of his six games, both against Argentina, and was also now seeking some consistency from his side.