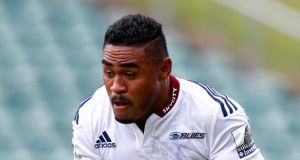 Francis Saili in action for the Auckland Blues. A potential centre partnership with Keith Earls at Munster is mouth-watering. Photograph: Phil Walter/Getty Images 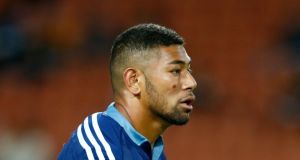 Charles Piutau is a freakish kind of player and the fullback/wing has every chance of making at impact at the World Cup with the All Blacks. Photograph: Getty Images

The signings of Charles Piutau by Ulster and Francis Saili by Munster are obviously a response to the poor seasons both clubs have had. People have been crying out for them to happen and there’s no denying both sides have further recruitment to make before they can compete at the highest level in Europe. But they can be happy with the start they’ve made because Piutau and Saili are the most exciting overseas signings made in Ireland for a long while.

What sets them apart from signings that have gone before is the fact that they are just the right age to give some of the best years of their career to Ulster and Munster. There have been big signings before who have made an impact but generally you’re either talking about guys who were bringing experience having had major careers already or guys who were only coming for a year and then heading off again.

These two are coming into their prime, they’re signing up for two years and they have the potential to transform the clubs they’re coming to. Piutau is a freakish kind of player who has every chance of making an impact at the World Cup for the All Blacks. There’s talk that he might have damaged his chances of making the squad by agreeing to move to Ulster next year but I reckon he’ll be in the mix. He’s too good to discard like that.

What’s interesting about Ulster signing Piutau is that you’d be hard pushed to say exactly what job they have in mind for him. He’s not arriving until the summer of 2016 and a lot can happen to them and to him in the meantime. One thing Ulster are not lacking is up-and-coming backs so a player such as Piutau isn’t what you’d have thought would be top of their shopping list.

To me, it looks very much as if they were offered a chance to sign him and felt it was too good to pass up. He’s not coming in to do any specific job but when someone of his quality becomes available, you do the deal and work out what role he’ll play when the time comes. Your team is better with a Piutau than without him, simple as that.

Saili is a bit different in that Munster have signed him to solve a problem that has been ongoing since the last time they won the European Cup. He is a badly-needed signing who is coming in to improve the Munster midfield. His name would have been out there as someone who was interested in coming to play in the northern hemisphere and for Munster to get his signature is a massive coup. It’s long overdue and Anthony Foley needs it to work out.

The thought of a partnership between Saili and Keith Earls in the Munster midfield is mouth-watering. It has the potential to have an effect on the whole team. If you have a forward pack that dominates games but isn’t getting the results because your backs can’t break down the opposition, the effect on morale can be serious. You can have fellas walking off the pitch thinking this is all for nothing. One signing isn’t enough to change that but Saili is a good start.

That’s what you want out of an overseas signing – someone who can come in and contribute. This is a team game so no one player is going to turn everything around but you want someone to come in and just do the little things that the others couldn’t. Small improvements multiply that way.

I have sometimes felt sorry for overseas players that have come in through the years. Okay, they were earning plenty of money, but it’s not easy. People have higher expectations of you than they do of someone who has come through the academy and they’re a lot less forgiving if it takes you a while to settle.

I’ve heard people give out about overseas players as though it was a simple thing they were doing. But coming across from the other side of the world, leaving your family and support behind, arriving into a new community expecting you to work wonders – that’s no easy life. I don’t care what money you’re on, that’s a lot to live up to.

At the same time, some players don’t help themselves. I’ve sat in dressing rooms and looked across at some overseas players and they’ve frustrated me and irritated me. I’ve wondered were they really bothered. Did defeat hurt them as much as it hurt the rest of us? Did they think about it when they went home in the evening? Was their mood bad for the rest of the weekend?

Sport is a ruthless business. If a guy’s attitude is wrong, if he isn’t going through the pain threshold in his fitness sessions, if he isn’t taking on enough responsibility, it doesn’t go unnoticed.

Attitude is hugely important. If you see an overseas signing who isn’t starting the big games, who is playing Pro12 but struggling to make the cut for European matches, it’s a fair bet that his attitude has been a factor. He obviously had talent at some point – or even just potential. If he’s not making the grade, it’s not because his talent disappeared. It’s because he didn’t make enough of it. Those guys don’t get a second contract.

We were buzzing. To us, this was our bosses at Munster saying, “We’re going to provide you with the best players for you to go and win more trophies. We know you’re serious about achieving success – this is a statement that says we are too.”

That’s all you want as a player. Everything is unknown – even bringing in a proven world-class player such as Dougie was a step into the unknown – but just by doing it, the club challenged us to raise our standards that bit higher. When he arrived, it was clear very quickly that he wasn’t just here for a jolly. The way he carried himself off the pitch, the honesty he showed in training, it all meant that he was very quickly accepted.

Saili and Piutau aren’t Dougie Howlett but they have the potential to have that sort of impact. They’re both gifted players, with incredible pace and power. They’re not the last piece of the jigsaw for either Munster or Ulster – in fact, both sides need more signings of their quality before they arrive. But this has been a good week.

Irish clubs will never be able to sign the numbers and quality the French and English clubs can. But you can be sure there are clubs in both countries who are annoyed at having missed out on Saili and Piutau. These aren’t box-tickers and squad-fillers. They’re real quality and I expect them to have a serious impact.

1 The Offload: Ireland are stuck in no man’s land
2 Nicky English: Galway and Waterford face battles with fatigue in All-Ireland semis
3 Former Ireland assistant manager Maurice Setters has died aged 83
4 Every kind of wind imaginable was against Tipperary football - and they came through
5 Crowds of 4,000 to return to sporting events in England from next week
Real news has value SUBSCRIBE