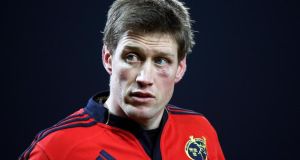 Ronan O’Gara: said a Sky goodbye, that, piled on top of David Beckham’s au revoir, made the sporting week nigh on unbearable. Photograph: Dan Sheridan/Inpho

As the bard James Marshall Hendrix put it, “the story of life is quicker than the blink of an eye, the story of love is hello, goodbye”. And so it was, Munster bidding the fondest of adieus to Ronan O’Gara last week, safe in the aching knowledge that rugby life would never be the same again.

And that feeling was somewhat heightened by seeing the fella make his Sky Sports debut on Saturday on their Lager Cup final coverage. He was analysing Clermont Auvergne and Toulon arrows (aka tactical kicking and the like) on two telly screens with Will Greenwood, making you realise life had, indeed, moved on, and we just had to get used to it.

Alex Payne had introduced Sky’ experts, enough retired rugby lads to make up a squad, before teasing us with “ also joining us, perhaps the greatest player this tournament has ever seen”.

No, twas Ronan, his jaw flexing a little uncomfortably after the introduction, and, perhaps, after that montage of his greatest moments in the competition, all of which most probably left the Munsterites in floods.

The boy did good, you have to say. The final? Well sure, yes, it was in Dublin, but, and not to be parochial about it, it was covered by a British channel and featured two teams from France, neither nation voting for us in the Eurovision, so who cared, like?

One of them won – to be exact, Jonny Wilkinson beat Clermont, according to Stuart Barnes – and that was that, the highlight being Ref Cam.

It wasn’t Ref Cam’s debut, but it was its first outing on a mammoth occasion, strapped to Alain Rolland’s upper chest, as if he hadn’t enough to be worrying about.

Ref cam
The jury remains out-ish on this, largely because most of the shots from Ref Cam look like they’ve been filmed by an trolleyed chap on his mobile phone at 4.30am in Temple Bar, while the rest show the ref chatting with rugby players’ chests, so elevated do they be.

The best moment, though, was a scrum, which looked like a bunch of lions fighting over a gazelle, Ref Cam sensibly reversing pronto-ish from the fray, Rolland deciding his life was worth preserving.

Anyway, France prevailed, as many predicted, and Ronan said a Sky goodbye, that piled on top of David Beckham’s au revoir made the sporting week nigh on unbearable.

While Ronan will always be Munster’s Golden Balls, Beckham will remain the boy wonder of knickers manufacturers until the end of time, but those with only a passing interest in the underwear business will remember him as a mighty fine footballer, who could cross a ball like few others, and who could teach a thing or two to today’s upstarts about professionalism and dedication and all that stuff.

Speaking of dedication. Stop laughing at those West Brom fans who left for home after 30 minutes yesterday, their repugnance at their team’s performance brought to us live and exclusively by Setanta.

With any bit of luck, someone recorded their disgruntled departures and have since uploaded them to YouTube. 5-5, like.

Feeling upbeat
Meanwhile, over on RTÉ, Pat Spillane was feeling upbeat ahead of the football Championship. “I’m looking forward to the season, we’re starting with a blank page, my glass is half-full, I’m going to be positive, as yer man says: ‘don’t worry, be happy’.”

By full-time in the Cavan v Armagh game, his glass was drained. “Armagh have been performing at that level for the last number of years; they got knocked out of last year’s Championships by Roscommon – who are hardly world-beaters,” he grumbled.

Neither shy nor retiring, is Pat, unlike Ronan and David. They’ll move on to pastures new, though, Pat, you suspect, will be chomping the same auld grass until September. At least.