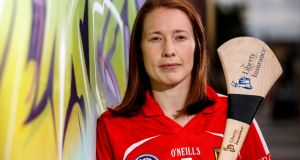 Rena Buckley: “You tend to remember the ones [finals] you lost better than the ones you win. They stick in your mind. But you have to learn from them.” Photograph: James Crombie/Inpho

It was back in 2004 that a 17-year-old Rena Buckley played in her first senior All-Ireland final, the day ending in heartbreak when Cork lost to reigning camogie champions Tipperary by eight points. She wondered if she’d get a second chance, if there’d be another day in Croke Park.

As it happened, there were to be plenty.

When she leads Cork on to the pitch on Sunday it will be her 22nd appearance in a senior All-Ireland final since 2004, 11 each in camogie and football, winning 17 of them. There has been only one year in the last 13 that she hadn’t a final to prepare for, and in nine of those she had two. The road to Croke Park, then, has become a familiar one.

The numbers are mind-boggling, but one person who’s not that all that fussed about them is, well, Rena Buckley.

“Ah sure,” she tends to say when she’s reminded of her record, putting it down to good fortune, her team-mates and management. Anyone but herself, really.

But if Cork were to avenge last year’s defeat to Kilkenny then Buckley is likely to have to field questions about another number: 18. That’s how many winning medals, in football and camogie, she would have amassed, moving her one ahead at the top of the roll of honour of her long-time buddy Briege Corkery, who took this year out. She would also become the first woman to captain her county to victory in both camogie and football, having led the footballers to success in 2012.

History-making, though, is something she’ll reflect on when the boots are hung up.

“Myself and Briege would have got a lot of attention last year [when they won their 17th medals], but sure, we lost the camogie final and it was all about Kilkenny after. It will be nice to look back on it, but for the moment it’s all about this Cork team doing well. The captaincy is a huge honour, I’m lucky to be involved with two greats clubs, Donoughmore in the football and Inniscarra in the camogie, and they’ve given me the opportunities. It’s really special for me, to be representing my club and my family, I’ll be proud to be playing in Croke Park as captain.”

Inniscarra’s winning of the county title, and Buckley’s subsequent appointment as Cork camogie captain, helped her decide on which code to focus on in 2017, an increasingly busy life meaning she couldn’t play both this year.

“I just physically didn’t have the time to be keeping it up, so I had to make a choice,” she says. “Between work [she’s a physiotherapist in Macroom] and studying for a Masters in sports physio [in UCD], it just wasn’t possible to do the two.”

Did you feel lazy this year?

“I did,” she laughs. “It was definitely different alright. It was so strange watching the footballers on television, you’d love to have been part of it, but there comes a time. There was a five-week lay off earlier in the summer for the camogie team, so that was a weird experience.

“ I’d have been used to having a match every couple of weeks any way. But we’ll see at the end of the year,” she says, not ruling out a return to football, one that would be warmly welcomed by the team after they saw their winning streak ended by Mayo in this year’s semi-finals.

And the camogie team have their own defeats to ponder, Kilkenny getting the better of them again in April’s league final to retain their title, confirming their standing as the country’s top side having ended that 22-year All-Ireland winning drought last September.

“Once you get that monkey off your back, you can really kick on. I played in a Cork football team that never even got to Croke Park, then we won our first All-Ireland and went on to win five-in-a-row. Kilkenny knew they were good enough, they just had to get a run of matches together and they did that last year. We thought we were going great going in to that final, but then everything fell apart on us. Kilkenny came at that game with fierce intensity, they played exceptionally well, we’d no complaints. We were second best of the day.

“They’re hard to play against, their set-up is quite defensive so there’s very little space for our forwards. And they break so quickly you have to be sharp as a back, they can really punish you. They were excellent last year, and same again in the league final. Again, quite defensive, but when they attacked they punished us, they pounced on a couple of opportunities. They know how to win games.

“So it was back to the drawing board this year. It’s not the only final I’ve lost in Croke Park, and you tend to remember the ones you lost better than the ones you win. They stick in your mind. But you have to learn from them. We came back from those losses and we can do it again.”

They got the mother of all frights, though, in the semi-final against Galway when, having gone eight points clear, they failed to score for close to half an hour, Galway’s late rally testing Cork’s nerve. And they suffered a significant blow in that game too, seven-time All-Ireland winner Gemma O’Connor sustaining an ankle injury that rules her out of the final.

“She’s a huge loss, she’s central to our game, really,” says Buckley. “She’s been a stalwart of Cork camogie for so long, we’ll certainly miss her experience. But it’s a team sport, that’s why there’s a panel of players, we just have to get on with it and give it our best.”

And when it comes to numbers, the only ones she’s interested in are those on the scoreboard come the end of Sunday’s game.

21: The number of All-Ireland finals, in camogie and football, she has played in – it’ll be 22 on Sunday

6: The number of years she’s done the double, winning both the camogie and football All-Irelands

1: The numbers of years, since 2004, she has failed to reach either a camogie or football final