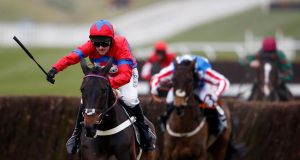 Sprinter Sacre, with Nico de Boinville on board, clear the last to win the Queen Mother Chase. Photograph: Getty.

If quicker spring ground conditions contributed to Un De Sceaux’s Champion Chase undoing it looked to allow Yorkhill fully exhibit his talent in the Neptune to the extent it encouraged Willie Mullins to think thoughts of next year’s Champion Hurdle.

Although Yanworth was a heavily-backed favourite to justify his big reputation he never looked likely to get the better of his Irish rival from before the straight after Ruby Walsh secured a ground-saving trip up the inner.

It left Walsh one winner shy of a half century of festival successes and, like Mullins, the jockey was immediately thinking ahead to Cheltenham 2017.

“He has the pace for a Champion Hurdle but could win the Arkle,” he said, a comment that had Mullins mulling options. “I’d be minded to go down the Champion Hurdle route. When you see the way my Champion Hurdle horses fell like flies this year – with Faugheen and Arctic Fire – it’s tough racing and I’d love to have another super-sub like Annie Power, ” the trainer considered. “I did have chasing in mind but I’m not so sure now. He’s a really smart hurdler. The sound surface has suited too – that has helped.”

“My lad travelled and jumped and filled all the gaps for me. I always had enough horse,” said Russell after Diamond King boosted trainer Gordon Elliott’s morale.

In the previous RSA an eagerly anticipated head-to-head between No More Heroes and More Of That failed to materialise. The latter finished third and was found to have burst blood vessels but that paled in comparison to No More Heroes who struck into his left fore leg and was taken to veterinary hospital.

Diamond King was transferred to Elliott from Donald McCain’s yard earlier in the season and the Co Meath trainer said: “Every horse is an individual but we got to know him and he certainly likes this better ground. This is his trip and Aintree and Punchestown will be looked at next.”

“I was inconsolable last night as I really thought The New One would win but this has made up for it. It looks like we have another one. I hope Blacklion makes up into a Gold Cup horse. He’s done all his winning on heavy going but I had a feeling, because he’s small, better ground would suit,” the trainer said.

Ballyandy just denied the Mullins-trained outsider Battleford in the Champion Bumper, after which Battleford’s jockey, Mikey Fogarty, was hit with a 13-day suspension for his use of the whip.

The ground is drying out at the track so quickly that selective watering to maintain good going will be carried out.

Sam Twiston-Davies also doubled up on the day as Diego Du Charmil held off his stable companion Romain De Senam in a close finish to the Fred Winter Hurdle.

“I don’t often have a bet but I did on the winner: not a massive amount but I got 16 to 1 three weeks ago,” admitted trainer Paul Nicholls. “I was worried he’d run green and Sam said the minute he hit the front and heard the crowd he looked up.”

Any Currency has heard the festival roar plenty times and after finishing runner up in the Cross-Country Chase in the two previous years, the locally trained 13-year-old finally had his day when proving a length too good for the Irish favourite Josies Orders.