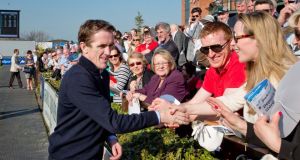 Tony McCoy is congratulated by well wishers after his last race on Irish soil at Tuesday’s meeting at Fairyhouse. Photograph: Morgan Treacy/Inpho

Tony McCoy signed off his career in Ireland with two unplaced rides at Fairyhouse.

McCoy, who received a huge ovation when shaking hands with racegoers in the paddock, said: “It’s sad that this is my last day riding in Ireland but hopefully I’ll be allowed back to spectate in years to come. I think the lads in the weighing room are happy to see me go!

“I’ve known lads like Ruby Walsh, Paul Carberry and David Casey for a long time, and I’ll miss coming to Ireland. I’m flattered by all the attention that I’ve been given, and I’ve been just trying to keep my mind on the job.

“I’m hoping to be at Punchestown for a few days, and I was walking around JP’s (McManus) place this morning looking at plenty of nice young horses that I won’t be able to ride over the next few years.

“I’ll miss places like this, that’s for sure. There’s times I’ve wished I hadn’t been champion jockey, because I think I could have ridden a little bit longer and maybe a little bit more in Ireland, but I wouldn’t be going to complain – the only complaint I’ve got is I’d love to do it all again.”

He added: “I’ve no thoughts about training as my life has been very committed for the past 25 years and I want to have a bit of a life for the next 25.”

McCoy’s luck may have been out but their was more success for trainer Willie Mullins, who enjoyed a treble at the Meath track.

The difficult to predict Twinlight earned himself a place among Mullins’s formidable team for the Punchestown Festival by getting his season back on track in the Normans Grove Chase.

The eight-year-old proved his class with a Grade One success in the Paddy Power Dial-A-Bet Chase at Leopardstown over Christmas, but has been largely disappointing since, particularly when beaten a long way at Naas in February.

With impressive Naas winner Mallowney the 1-2 favourite to confirm his superiority, Twinlight was a 3-1 shot, but he emphatically turned the tables under Ruby Walsh.

The Mullins runner was sent straight to the lead in the Grade Two contest and his jumping was largely assured.

Mallowney tracked him into the straight, but Twinlight began to assert between the final two fences and was well on top at the finish. The only other runner, Savello, finished a distant third.

Mullins said: “We ran him in a snaffle with no noseband which may have made a difference, but in fairness he jumped great and the other two didn’t jump as well.

“Ruby said he was really enjoying himself and was a different horse than the last day.

“He hasn’t missed a beat all season and, as long as the ground is soft, he’ll go to Punchestown.”

Mullins and Walsh had earlier successfully combined with Upazo (11-4), who made it third time lucky over fences in the Fairyhouse Vets Promoting Equine Health Beginners Chase.

“The ground made a big difference, and he jumped great today. He seems to have improved,” said Walsh.

And it was a treble for Mullins when son Patrick guided even-money favourite An Dearg Mor to victory in the bumper.

Clondaw Warrior looked set to provide Willie Mullins with yet another winner when going clear after the final flight in the Farmhouse Foods Handicap Hurdle, but he was reeled in on the run-in by the Tom Mullins-trained Some Article (20-1), who got up by a neck.

Joseph O’Brien’s wait for a winner over jumps goes on. The dual champion jockey was riding the weakening Draco when he came to grief at the final flight. O’Brien walked away none the worse.

The 7-1 shot had both heavily supported favourite Pleasant Company and Fine Article for company after the final flight, but Brian Hamilton’s charge found most for pressure under Declan Lavery to take the prize by a neck.