Lady Cecil’s charge made a late burst to deny Genzy 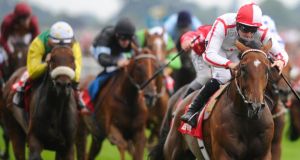 Tiger Cliff won the Betfred Ebor Handicap at York under Tom Queally for Lady Cecil. The 5/1 chance rattled home in the closing stages to deny the strong-travelling Genzy who looked to have made a race-winning move under Richard Kingscote two furlongs out.

Ian Williams’s charge kicked a couple of lengths clear inside the final quarter mile but was denied by the late move of Tiger Cliff.

Genzy was half-a-length adrift in second at the line with Number Theory a further length behind in third.

Sky Bet paid out on four places each-way to the delight of Ted Veale backers after Tony Martin’s charge stayed on for fourth.

Queally said: “I wanted to angle to the stands’ side as much as I could because it’s a bit quicker there. He travelled well and we were happy to see the rain as he has the attributes of a horse that handles cut in the ground. He always finishes his races and he dug deep when it mattered.

“It’s probably one of the hardest races of the year to win. It’s good when a plan comes together. It’s great for Henry Ponsonby (owner) and the team at home.”

Ponsonby admitted his emotion at the occasion after the death of Sir Henry Cecil earlier this season.

Ponsonby added: “I’m very emotional, I know Sir Herny would have loved this. It’s just wonderful. He’s still a very untapped horse this. I must thank my owners, Michael Marshall and Lady Cecil, all at team Warren Place. ”

Marshall was assistant to Cecil and has continued in the role since the licence was passed over.

He added: “It’s a team performance - a great job. On his homework we felt he had a great chance, we weren’t sure on the ground but we took a chance.”

Genzy’s trainer, Ian Williams, said: “You’d think he was the winner a furlong out. He’s run a blinder and we’re delighted with him. Probably his race last week (in the Geoffrey Freer at Newbury) left its mark a little bit, but we’re very happy with him. He’s run great.

“He may go to France and run in the stayers’ race on Arc day (Prix du Cadran). He qualifies for premiums over there.”

John Holt, trainer of the third Number Theory, said: “The weight probably did it for him a bit, but he’s so genuine.

“Seb (Sanders) said he felt one to come to him and he found more. He wasn’t quite good enough on the day but he’s a marvellous horse. I’m not sure what he’ll do next but he may go for the stayers’ race on Champions Day.”