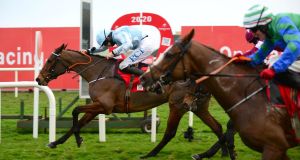 Honeysuckle will go into the new year with her unbeaten record intact – and speculation about what race she might line up in at Cheltenham in March still fizzing – after a gutsy odds-on victory at Fairyhouse on Sunday.

The hugely popular mare made it back to back wins in the Bar One Hatton’s Grace Hurdle although the 4-11 favourite had only half a length in hand of Ronald Pump at the line.

Unlike 2019, when she’d had a prep race, it was Honeysuckle’s first start since an epic defeat of Benie Des Dieux in Cheltenham’s Mares Hurdle in March.

The run-in to that had been dominated by whether or not she would run there or in the Champion Hurdle and whether the latter might even be the easier contest.

Honeysuckle had after all landed the Irish Champion Hurdle at two miles prior to Cheltenham and tactical speed looked to be her trump card on Sunday in a race that turned into a sprint up the straight.

Trainer Henry De Bromhead suggested afterwards that her route back to Cheltenham will again take in the Irish champion, no doubt well aware that the plan will be accompanied by familiar conjecture.

Confirming that Leopardstown’s race in February will be Honeysuckle’s next start, De Bromhead said he will get that out of the way “and then see”. Three words that will probably be parsed for all kinds of meaning over the coming months.

When quizzed about whether having a Cheltenham festival victory already “banked” may make connections more willing to consider taking on Epatante in the champion, the trainer didn’t dismiss the idea.

If the Cheltenham championship could be switched to Fairyhouse it might sway things as Honeysuckle’s run of nine career victories includes half a dozen at the Ratoath track.

“She was jumping her hurdles a bit better and is maturing,” reported her jockey Rachael Blackmore, notching her own 10th Grade One success. “She might have been just feeling it a bit on her first run after the last, but she gets the job done every day.”

The 17-2 shot turned the marathon contest into a rout, proving 13 lengths too strong for the favourite, Brace Yourself.