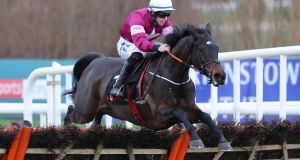 Ryanair boss Michael O’Leary might be forgiven for feeling a lot of people are being very brave with his horse, Apple’s Jade, who recorded a ninth Grade One victory in bloodless style at Leopardstown on Friday.

The 8-13 favourite ultimately won the Squared Financial Christmas Hurdle by an easy 26 lengths after her main rival Faugheen took a crashing fall at the second last flight.

Such a smooth success at three miles inevitably prompted plenty of advice towards both O’Leary, and trainer Gordon Elliott, that rather than try to regain her OLBG Mares Hurdle crown at Cheltenham in March Apple’s Jade is a potential World Hurdle winner in waiting.

Elliott’s subsequent suggestion that keeping her busy until Cheltenham might mean dropping back to two miles for February’s Irish Champion Hurdle will no doubt encourage others to believe the Champion Hurdle itself is the worthy stage for this superstar mare.

The range of Apple’s Jade’s talents mean she is a general 4-1 shot for the World Hurdle with 16-1 about her for the Champion while shades of odds-on are available about the mares race which is starting to look a very unloved child.

“A win at Cheltenham is very hard to find, even if it is the Mares!” O’Leary reminded everyone. “We’ll go for the race where we have the best chance of winning. I’m sure we’ll have something for the three mile anyway. I’d be surprised if ultimately we don’t decide to send her to the Mares.”

For his part, Elliott all but dismissed the Champion Hurdle as a Cheltenham option and said: “It’ll be the Stayers or the Mares – and if I was betting on it I’d say the Mares.”

That still presents a choice that’s likely to generate plenty of annoying enquiries to all concerned on the run up to Cheltenham.

But should this remarkable mare, who has already achieved so much before turning seven on New Year’s Day, maintain her unbeaten run this season in February’s BHP Irish Champion Hurdle then festival speculation could reach fever pitch.

“She likes running and I think I gave here too much time between her last run and Cheltenham last year. I’ll have to talk to Michael and Eddie (O’Leary) but I wouldn’t mind bringing her back here over two miles,” said Elliott.

How that pans out in Gigginstown’s overall scheme of things could depend a lot on Samcro’s display in Saturday’s Ryanair Hurdle. However if his reputation is in need of some restoration Apple’s Jade’s is at a career high.

“She’s unreal, a pleasure to be riding,” said jockey Jack Kennedy. “She was in good form this time last year and then lost her way so hopefully she can keep continuing this way.”

The sight of Faugheen eventually getting to his feet after such a dramatic spill might have been the best sight of any week this year.

It certainly proved to be an upswing in Willie Mullins’s fortunes on the day as Kemboy jumped into the Cheltenham Gold Cup picture with a resounding success in the featured €175,000 Savills Chase.

It unfolded into a messy, stop-start sort of three mile chase that saw the 9-4 favourite Road To Respect enjoy little luck in a bid to repeat his 2017 victory. Sean Flanagan’s mount met interference after the fourth last and also appeared to stumble on the bend towards the second last.

Road To Respect eventually failed by just a head to overhaul Monalee for second but by then Kemboy and David Mullins had long gone.

Kemboy’s claim to headline status before mostly revolved around not making it to Newbury’s Ladbrokes Trophy over a month ago due to transport problems with a ferry.

“He had improved at home and we said we’d give him his chance to be a good horse, and if not, we could always go back and do something else,” Willie Mullins explained afterwards.

“When you’re nearly topweight in the Ladbroke, and when you’ve a horse at that level, you’ve got to either (go on to) be a good horse or you fall back down the ranks. And he’s made the step up to be a good horse,” he added.

Mullins’s other runner, Bellshill, was another hardly suited by the race tempo and finished fourth.

Noel Fehily had to settle for second in the big race on Monalee and the English based jockey had earlier missed out on the opening race winner Malinas Jack. Fehily’s flight was delayed and Barry Geraghty stepped in for the lucky ‘spare.’

De Bromhead doubled up with Cuneo in the following handicap while The Church Gate was five and a half lengths too good for the favourite Lake Takapuna in the other handicap hurdle.