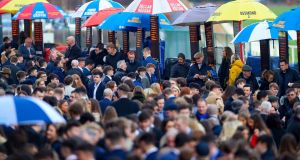 Leopardstown’s authorities have apologised for “unacceptable” delays at the turnstiles when the track’s famous Christmas festival got under way on St Stephen’s Day.

Some racegoers were left frustrated at lengthy queues into the course after a bigger crowd than expected showed up for what is a traditional racing day out for many Dubliners in particular.

“We were not able to cope with the crowds that came for a period. There was a much bigger crowd of younger people than we had anticipated,” admitted Leopardstown chief executive, Pat Keogh.

“We had made changes at the turnstiles. We had tried to encourage people to buy tickets in advance and we put more scanners in so more people who bought in advance could get in quicker. But we got the rejig wrong and there were unacceptable delays. People were queuing for too long, unacceptably long; we wouldn’t be happy with that level of service.

“We misjudged it. An awful lot more people came with cash, looking to buy tickets. We got it wrong and we apologise for any inconvenience,” he added.

An official crowd of 13,218 was at Leopardstown on Wednesday. That was down from last year’s corresponding attendance of 13,412.

Ruby’s decision to skip Leopardstown and go to Limerick looked like paying off until a final fence mistake by the odds-on favourite Getabird helped hand a narrow victory to Hardline in the big race there.

Back at the Foxrock track Mark Walsh landed the featured Grade One Racing Post Novice Chase on the JP McManus-owned Le Richebourg.

The 3-1 winner lead home a one-two for trainer Joseph O’Brien who also saddled the runner-up Us And Them.

“The obvious thing to do would be to come back here for the Dublin Racing Festival,” O’Brien said of the winner who was cut to 8-1 for the Arkle at Cheltenham. “More than likely he’s an Arkle horse.”

It was a second win in the St Stephen’s Day feature for Mark Walsh who also won it for McManus in 2015 on Defy Logic.

The jockey initiated a double on the card when City Island, racing in the colours of Bernadine Mulryan, wife of businessman, Sean Mulryan, won a maiden hurdle.

In contrast, Limerick’s first ever Grade One, the Matchbook Exchange Novice Chase, gave jockey Keith Donoghue the first Grade One victory of his career.

Hardline took full advantage of Getabird’s final fence blunder to score by half a length at odds of 9-2 for his owner, Ryanair boss, Michael O’Leary.

“I knew he was going well but you never know with Ruby what he is holding onto,” Donoghue explained.

“I got a good jump at the second last. I squeezed him down to the last and knew if I got a good jump I had every chance. Ruby missed it but he had plenty time to come back at me and I was always holding him,” he added.

Walsh had earlier won on the second of his three Limerick rides, Salsaretta.

JP McManus enjoyed top-flight success with Le Richebourg at Leopardstown but might have been among those stunned by Buveur D’Air’s shock defeat at odds of 1-4 in Kempton’s Christmas Hurdle.

The 12-1 winner provided trainer Paul Nicholls with a remarkable tenth King George victory, half of them courtesy of the legendary Kauto Star.

Clan Des Obeaux is part-owned by the former Manchester United manager Alex Ferguson. His King George victory saw him cut to 7-1 for the Cheltenham Gold Cup in March.

The holiday action continues on Thursday with Leopardstown and Limerick hosting their four-day festivals.