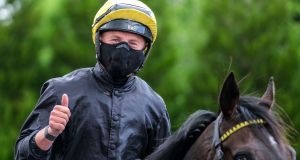 Jessica Harrington turns to Tom Marquand, the rising star of the British jockeys room, for Millisle in Royal Ascot’s Group One feature on Friday.

Millisle drops back to six furlongs for the Commonwealth Cup after failing to fulfil classic ambitions in the 1,000 Guineas.

With stable jockey Shane Foley staying at home due to coronavirus travel restrictions, Oisin Murphy took the mount at Newmarket and not a lot went right.

Millisle always appeared to be doing a bit too much off a surprisingly moderate early pace and quickly faded away as Love powered to success.

Murphy rides for Andrew Balding in Friday’s race and with Foley again staying in Ireland this time Harrington has engaged Marquand.

The 22-year-old Englishman returned from a winter riding in Australia with his reputation enhanced due to a pair of Group One wins on Addeybb in particular.

A stiff six furlongs should be ideal for Millisle based on the Guineas and on her Cheveley Park Stakes victory last year.

Significantly, considering the ground conditions, she can also boast a win on yielding to soft at the Curragh last August.

Aidan O’Brien runs four in the Commonwealth and both Lope Y Fernandez and Royal Lytham are wasting little time returning to action after lining up in last Friday’s Irish 2,000 Guineas.

Lope Y Fernandez briefly looked the winner too when making a sweeping run down the outside.

However the very fact he lines up here backs up the general belief that his stamina ran out over a mile when ultimately third to Siskin.

Whether the ground suits any of the Ballydoyle quartet is debatable but it shouldn’t be a problem for the French hope Wooded.

He won a Group Three in impressive style at Chantilly last month and was immediately pointed at this race.

O’Brien’s Derby winner Anthony Van Dyck steps back to the Group Two company for the Hardwicke Stakes. One of his major rivals Elarqam steps up to a mile and a half for the first time.

Stamina will be at a premium here and very soft ground conditions will not suit either of the two big guns.

Instead the circumstances might allow Morando, a wide-margin winner over the course and distance last year, his moment in whatever passes for the sun.

The ability to act on a testing surface will be a big plus in every race and O’Brien’s Lipizzaner looks to have that in the Group Two Norfolk Stakes.

He was runner up on soft ground on his debut in March before also finishing second to Lucky Vega on his next start.

Breaking his maiden here would be a major achievement but it’s one Lipizzaner’s stable companion Battleground managed on Thursday in the Chesham.

It’s not surprising Ryan Moore has opted for Santiago from the Ballydoyle pair in the Queen’s Vase.

He’s a rare son of Authorized trained by O’Brien and landed his maiden on soft going at Listowel as a two-year -old.