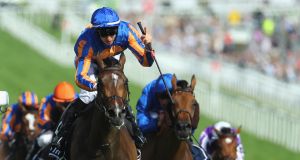 Donnacha O’Brien rides Forever Together to victory in the Investec Oaks at at Epsom Downs in June. Photograph: Getty Images

Donnacha O’Brien steps aside to allow Ryan Moore team up for the first time with Oaks heroine Forever Together in Sunday’s Group One feature at the Curragh.

Forever Together memorably broke her maiden at the fourth time of asking in the Epsom classic earlier this month where 19-year-old O’Brien secured a second English classic of 2018.

Moore finished only fourth on Magic Wand in the Oaks and surprisingly has yet to win a European classic this year although is odds-on to fix that on board Saxon Warrior in Saturday’s Irish Derby.

The Englishman knows after Minding a couple of years ago that winning the Oaks and then dropping in trip for the Juddmonte Pretty Polly Stakes is achievable.

With the star English older filly Coronet running instead in Sunday’s Grand Prix de Saint-Cloud, the major test for Forever Together could come from meeting fast ground conditions for the first time.

It was very different at Epsom where she thrived in the mud and her full-sister, Together Forever, won her Group One on soft ground.  She did however also win on a quick surface and Forever Together’s half brother, Lord Shanakill, thrived on good to firm.

This time O’Brien is on board Athena who should appreciate a drop back to 10 furlongs after running too freely in the Ribblesdale at Royal Ascot. But if she acts on the conditions Forever Together should proved very hard to beat.

Moore is on Flag Of Honour in the Group Two Comer Group Curragh Cup although another Ballydoyle hope, Giuseppe Garibaldi, might prove the three year old the older horses can’t concede weight to.

It’s a couple of years since Stellar Mass ran third to Harzand in the Irish Derby and he can prove his liking for the Curragh in the Group Three International Stakes.