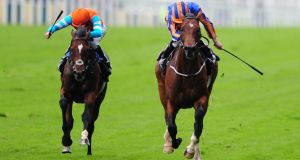 Ryan Moore enjoyed a day to remember as Twilight Son emerged victorious after a thrilling climax to the Diamond Jubilee Stakes at Royal Ascot.

He rounded off his campaign by chasing home champion sprinter Muhaarar at Ascot and having blown away the cobwebs with a run at York last month, he was a 7-2 chance for the main event on the final day of the showpiece meeting in Berkshire.

Moore buried the four-year-old in the middle of the field for much of the six-furlong journey before launching his challenge with a furlong to run.

French runner Signs Of Blessing, Hong Kong raider Gold-Fun and Charlie Hills-trained favourite Magical Memory were all in with a chance as the post loomed to set up a grandstand finish, but Twilight Son was in front where it mattered.

Gold-Fun was just a neck away in second, with Signs Of Blessing third.

Earlier the heavily-supported Churchill got favourite-backers off to the perfect start on the final day of Royal Ascot with victory in the Chesham Stakes.

Aidan O’Brien’s juvenile was only third on his racecourse debut at the Curragh last month, but was backed as if defeat was out of the question for his Berkshire assignment.

Always travelling well in the hands of Ryan Moore, the 8-11 market leader moved to the front with two furlongs still to run.

He started to wander a little when coming under pressure, and the late thrust of 25-1 shot Isomer made odds-on backers sweat, but Churchill passed the post half a length to the good.

Cunco, the first foal of the great Frankel and a winner on his Newbury debut, was far from disgraced in finishing third.

“He travelled nice and smooth and when he got there (the front) he was very green, but he’s a high-quality two-year-old.

“He’s a bit of a baby, but he can only improve and he’s one to look forward to.”

Moore picked up his second win of the day as Sir Isaac Newton clung on grimly to land the Wolferton Handicap.

Aidan O’Brien’s four-year-old has endured a slightly underwhelming career so far, but hinted at better to come when third behind Wednesday’s Royal Hunt Cup winner Portage in a Listed event at the Curragh last month.

After being sent off at 7-1 for what was his first ever start in handicap company, the Galileo colt was produced with a well-timed challenge by Moore and while he was crying out for the line in the dying strides, he held on by half a length from Second Wave.

Revolutionist was close-up in third.

Moore said: “I had a very good trip round and he’s a high-class horse when things drop his way.

“We thought an awful lot of him last year. The trainer has done remarkably well to get him back winning here today.

“He’s definitely got the ability and hopefully racing will bring him forward and he’ll get better.”

Meanwhile Dartmouth landed a famous success in the colours of the Queen in what was a dramatic Hardwicke Stakes at Royal Ascot.

Partnered by leading French jockey Olivier Peslier, the Sir Michael Stoute-trained four-year-old was sent off at 10-1 to add to his previous victories this season at Chelmsford and Chester.

Peslier cut a confident figure in the saddle throughout, positioning his mount on the outside of the field before launching his challenge in the straight.

Dartmouth proved a willing partner, picking up to challenge for the lead heading inside the final furlong and while Highland Reel was a persistent threat, the Royal runner saw him off by a head.

The front two did come close together and a stewards’ inquiry was immediately called, although the outcome confirming the placings was swift.

Almodovar ran a fine race from the front before eventually weakening into third place.

It was a 75th triumph at the showpiece meeting for Stoute, meaning he joins the late great Sir Henry Cecil as the winning-most trainer in Royal Ascot history.

Stoute said: “That’s a great mark to reach. I hope it doesn’t stop there.

“He’s a lovely, quality horse. Everybody in the yard is very fond of him.

“He’s stepped up all year. We put him into the John Porter, which was run at Chelmsford. He had another step up in the Ormonde Stakes and another one today.”

Peslier said: “The horse is relaxed and he came through well. When he’s in front he won’t stop.