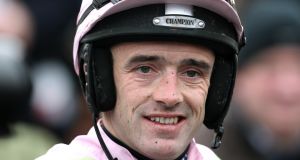 Ruby Walsh notched up a 100 winner at Thurles during the week. Photograph: Lorraine O’Sullivan/Inpho

The outcome of a 6.30am Ascot inspection could yet see Ruby Walsh with opportunities to move off the 100-winner mark for the season in Ireland at Navan on Saturday.

Walsh reached the century mark at Thurles on Thursday and is pencilled in to ride the odds-on favourite Un De Sceaux in Ascot’s Grade One feature. However, course officials aren’t optimistic about the cross-channel highlight beating the frost.

“It’s a shame but unless the forecast is incorrect I don’t think we’ll be raceable,” said clerk of the course Chris Stickels, who confirmed the Clarence House Chase will be rescheduled at a later date if Ascot fails the inspection.

Paul Townend is down to ride a trio of Willie Mullins horses at Navan. Arrangement may yet change, although Renneti will be a particular challenge for whoever rides him in the conditions event.

The returns of the former Champion Hurdle hero Jezki and the dual-Irish Gold Cup winner Carlingford Lough will be the focus of most attention in the race and on official figures Jezki could be a standout if anywhere near his peak.

Renneti for one is over a stone and a half ‘wrong’ on ratings but unusually for a Mullins horse this enigmatic but talented runner sports first-time blinkers. It will be interesting to see what impact they have.

C’est Jersy has proved expensive in his last two starts but can score in a maiden hurdle, while Arbre de Vie is preferred to Acapella Bourgeois in the Beginners Chase.

Mark Walsh needs just one winner to reach 50 for the season and as well as Jezki he can look forward to having a good chance in the opener aboard Thirsty Work, a handicap winner on his last start.

All The Chimneys has won three handicap hurdles since he last ran over fences a year ago and looks attractively weighted in the handicap chase. The two-mile trip and soft ground look ideal.

1 Serpentine stays on from the front to steal Epsom Derby for Aidan O’Brien
2 Eamon O’Shea: We spent quite a bit of time talking about older people rather than to them
3 Love tears them apart in stunning Epsom Oaks romp
4 Monica Seles: The warrior queen who could have been the best ever
5 Arsenal check Wolves to relight their European fire
Real news has value SUBSCRIBE

Chelsea make light work of Watford to move back up to fourth 22:18
Arsenal check Wolves to relight their European fire 19:41
Leeds move four clear as Brentford add to Wigan woes 18:07
Jamie Vardy reaches his century to get Leicester back on track 17:38
Glorious Greenwood as Man United thrash Bournemouth 17:28
Here is your handy guide to sport on television this week