IHRB confirms 26 per cent increase in whip offences in 2018 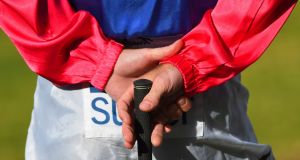 The Irish Jockeys Association expressed major disappointment both with the move to impose a figure on whip use and how it was done. Photograph: Vince Caligiuri/Getty Images

The body representing Ireland’s jockeys has said the Irish Horseracing Regulatory Board will “rue the day” it announced plans to restrict riders to a maximum use of eight strikes of the whip.

The IHRB confirmed on Friday it is coming into line with both France and Britain in restricting the number of times a horse is allowed to be struck. The new rules are set to come into force next month.

The move comes on the back of the publication of the IHRB’s 2018 statistics which revealed a 26 per cent increase in the number of whip offences last year.

“We knew in the middle of last year that the whip statistics had got worse. We met with the Jockeys Association in July and said if things didn’t improve that we would be left with no alternative but to increase penalties and review the whole rule structure,” Denis Egan, the IHRB’s chief executive, explained on Friday.

“We produced monthly whip statistics from July onwards and they just got worse, albeit the last two months they levelled off a bit. The directors [of the IHRB] decided action needed to be taken,” he added.

Earlier this week the French racing authorities said they were dropping the maximum number of times a whip could be used on a horse to five. In Britain the maximum use on the flat is seven strokes. Over jumps it is eight.

Authorities in Ireland had previously been reluctant to restrict whip use to a set number. However Egan indicated that from next month hitting a horse nine times will automatically prompt a stewards enquiry.

“The stewards on any day will have the power to disregard hits if they feel that they [were used] for a particular reason. For instance at Christmas Rachael Blackmore gave a horse three quick ones to stop it running out. Common sense will be applied.

“But from April the figure that will trigger an enquiry is nine. It doesn’t mean a rider will definitely be penalised. But it does mean there will be an enquiry and riders can expect penalties,” Egan said.

However the Irish Jockeys Association expressed major disappointment both with the move to impose a figure on whip use and how it was done.

“The number of strokes, in my view, is a very poor idea. It lacks foresight,” said the IJA secretary, Andrew Coonan.

“I’ve always said even one strike at the wrong time, in the wrong place, is too much and should be punished. Introducing a certain number is an incorrect application of the way the rules should be used,” he added.

“We discussed the stats and we pointed out there had been a change in the policing and stewarding of the whip regulations. It’s clearly not correct to say riding styles changed in 2018-19. Yet the stats they were claiming were significantly increased.

“That means only one thing, that the stewarding had changed. Denis Egan vehemently denied that but it is clearly the situation,” Coonan said.

“It’s disappointing that they’ve come out with this, unilaterally, when were in ongoing discussions about how whip use could be modified, and correctly interpreted, and those in breach of the rules could be correctly punished.

The IHRB’s statistical review also showed there were 27 positive test results from the 4,232 samples taken from horses at racecourses last year. There was a 43 per cent increase in out of competition with no positives from 582 samples.

The spike in positives, including a number of high-profile cases involving cobalt which is banned on raceday, was mostly put down to a lack of understanding by the IHRB’s Head of Anti-Doping, Dr Lynn Hillyer.

“Whilst the overall number of positive cases was an increase on previous years, on investigation of each case it was clear they largely arose from a lack of understanding of the risks around prohibited substances,” she said.

In other racing news, jockey Jack Kennedy can’t be accused of taking it easy en route to the Cheltenham festival with ten rides this weekend.

Kennedy takes ten rides for Elliott between Navan on Saturday and Leopardstown the day after.

Just 49 horses have been declared to run at Leopardstown where the going on the chase track is good to firm. That shouldn’t be an issue for The Church Gate who has a first start over fences in a year on the back of two hurdles wins.

1 James Ryan returns to the Leinster fold for Benetton clash
2 Will Addison starts as Ulster face crunch Bath showdown
3 Ralph Hasenhüttl: Shane Long at the heart of Southampton revival
4 Matt Williams: No easy way to earn your spurs as a top coach
5 James Lowe relishing the work, rest and play of his Irish rugby adventure
Real news has value SUBSCRIBE