Our Conor warms up for Cheltenham after racing at Leopardstown 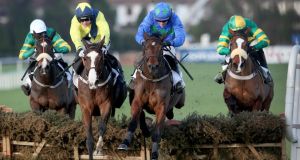 Leopardstown’s traditional post-racing Cheltenham gallops have fizzled out in recent years but the Champion Hurdle-bound Our Conor can help bring back some star-power tomorrow evening.

Dessie Hughes will have seven runners between Navan and Leopardstown over the weekend but it is Our Conor who is giving him all the right signals ahead of a return to the festival where he routed his Triumph opposition last year.

The Barry Connell-trained star used Leopardstown’s gallop-session 12 months ago and Hughes appears to be adopting an ‘if-it-ain’t-broke’ attitude. The Curragh trainer regularly used the same opportunity to work his dual-Champion Hurdle hero, Hardy Eustace. “Our Conor is fabulous at the moment. I wish the race were next week,” Hughes reported.

“The thing about our horse is he excels at Cheltenham. His win in the Triumph was exceptionally good.”

Another star performer working tomorrow will be the possible Ryanair candidate Hidden Cyclone whose trainer ‘Shark’ Hanlon said yesterday: “We haven’t fully decided whether we’re going (to Cheltenham) or not. He’ll probably go to Leopardstown and we’ll see after.”

Thousand Stars can take the racing honours in the Ballsbridge Hurdle.