French Guineas races will be run at Longchamp on June 1st 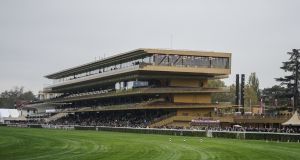 Racing behind closed doors in France appears set to resume on May 11th with confirmation on Friday that the French Guineas races are being deferred to June 1st.

France Galop, French racing’s ruling body, has outlined a revamped Group One programme that sees the Guineas moved to the start of June where they will be run on a Monday at Longchamp.

That is 22 days later than the first Classics were originally scheduled although plans are conditional on the French government, as is expected, giving racing a green light to resume next month.

There had been doubts about Longchamp being in a position to hold fixtures given the extent of the Covid-19 crisis in the French capital, where health services are under severe strain.

However a revised programme has been released by France Galop that sees Longchamp host one of three meetings due to be run in France on May 11th. The others are at Compeigne and Toulouse.

High-profile Group One races for older runners have also got new dates with the Prix Ganay on June 14th, the Prix d’Ispahan on July 19th and the Grand Prix de Saint-Cloud on June 28th.

Over jumps the Grand Steeple-Chase and the Grande Course de Haies d’Auteuil will both be run on June 7th.

Restrictions on travel due to the coronavirus emergency mean that overseas horses and international based jockeys can’t compete in France during May, although that could change by June.

Racing is set to start again behind closed doors in Germany a week earlier on May 4th and the resumption of action on the continent has been described as encouraging by leading figures in Ireland.

The sport was cancelled here a month ago due to the public health emergency although it remains ‘racing ready’ to take place behind closed doors given Government approval.

There remain outside hopes that Government could give it a green light ahead of its May 5th deadline on current social restrictions.

However the Irish Racehorse Trainers Association has already described as “optimistic” any chance of a resumption here before June 1st.

On Friday top trainer Dermot Weld said: “France and Germany are positive signs. But we will be guided by the Government guidelines here and adhere to that. It will be a Government decision on the health of the country at the given time.”

France Galop have taken the step of scrapping some races this year including the traditional Arc trial, the Prix Niel. Instead the Group One Grand Prix de Paris will take its slot on September 13th at Longchamp.

It also announced that entries for the Prix de l’Arc de Triomphe in October will not be made as usual at the end of May but “will be rescheduled for mid-June, probably before Royal Ascot.” That will fall between the French Guineas and Derby meetings.

The Longchamp programme on May 11th is expected to see a number of Classic trials take place as well as the Group Two Prix d’Harcourt.