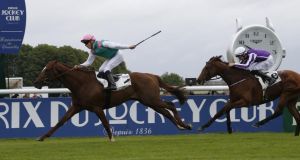 Aidan O’Brien came up just short of securing a first French Derby success when Highland Reel found New Bay too good at Chantilly on Sunday, but attention now switches to the likely make-up of this Saturday’s Derby field at Epsom.

Ante-post favourite Golden Horn is expected to be put into racing’s “blue-riband” at the five-day declaration stage for a supplementary fee of over €100,000, a step also being considered by Curragh trainer Ken Condon for his Ballysax and Derrinstown winner Success Days.

Both Hans Holbein and Kilimanjaro are already likely starters for Ballydoyle, who also have the dual-Guineas winner Gleneagles and the Gallinule runner-up Giovanni Canaletto among current entries.

The chance to add to their Derby deck at the supplementary stage is still there for Ballydoyle, and O’Brien indicated he is likely to keep his options open for the time being, including with Gleneagles.

“I think there is another stage tomorrow and I didn’t hear that he [Gleneagles] was going to be taken out, so I presume he is going to be left in – I presume,” said the Ballydoyle handler in Chantilly.

As for possibly supplementing the filly Found, O’Brien said of his Oaks entry: “I didn’t hear anything about the filly being supplemented in it yet anyway.”

The team around Zawraq admits there are stamina doubts about their unbeaten Irish-trained hope although they remain hopeful.

“There is a lot of rubbish talked about the Derby. William Haggas (trainer) said earlier in the week people say it’s a bad race but try to win one, and he’s right,” said Angus Gold, racing manager to Zawraq’s owner Sheikh Hamdan.

“Golden Horn certainly brings the best form we’ve seen so far, and only time will tell where Zawraq fits in class-wise. He’s had two races, won them both and looked good doing it.

“I’m not going to say he’s going to win the Derby, but Dermot has had enough good horses to know what he’s dealing with and he thinks he’ll run a very good race if he stays. Whether he’ll stay or not, we’ll only find out on the day.”

New Bay is as low as 8/1 for the Prix de l’Arc de Triomphe in October after an impressive Prix du Jockey Club defeat of Highland Reel at Chantilly under jockey Vincent Cheminaud, France’s champion jumps rider. It was a fourth Jockey Club success for legendary trainer Andre Fabre, and although Highland Reel had to settle for second, it was still the best French Derby result so for his trainer who also ran Cape Clear Island and War Envoy in the race.

“I’m delighted with Highland Reel. He ran a very good race. He progressed well from the last race. He has a lot of options. There is the Irish Derby or the Eclipse. He has all of those races possible. The winner quickened up very well, didn’t he?” O’Brien reported.

France’s premier classic appeared a somewhat messy affair with a slow early pace cut out although New Bay came from the rear of the field to win well under Cheminaud.