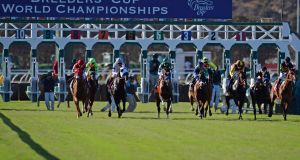 Over the years Ireland’s champion trainer has thrown 14 horses without success at the $6 million climax to US racing’s shop-window event.

They have included gallant-placed efforts by Giants Causeway and Declaration Of War as well as blow-outs by stars such as Hawk Wing, Oratorio and even Galileo; all in an attempt to provide Coolmore Stud with a commercial turf/dirt “beau-ideal” stallion.

So while the Breeders Cup rolls into Del Mar for the first time, O’Brien meets familiar challenges such as gauging end of season fatigue and adapting to a race-day medication environment even more alien to European visitors than a track which makes Chester look expansive.

O’Brien’s overall Breeders Cup record testifies to his Ballydoyle team’s capacity for successfully adapting to those issues. But it is meeting the dirt that has proved an insurmountable obstacle to ultimate Classic success.

The dual-Guineas winner Churchill will be backed up by War Decree as O’Brien attempts to secure the race he and the Coolmore partnership covet more than any other at 12.35 on Sunday morning.

The word impossible is redundant in any horse race and especially one involving the world-record breaking trainer. However, Churchill in particular is being set that sort of formidable challenge which proved even beyond his sire, Galileo.

Suddenly switching to dirt after a career moulded for grass involves an adaptability which perhaps can be best compared to a top rugby union player being asked to immediately mix it with the best in rugby league: the basics might look the same but the nuances are all different.

One of racing’s nuances is pedigree and Churchill’s provides little or no encouragement that he can pull off a minor miracle against elite Americans who have spent their lives on dirt.

It’s 16 years since Johannesburg proved to be an exceptional two-year-old champion by landing the Juvenile on dirt – a task US Navy Flag is set too on Saturday night – but there was encouragement in his pedigree that there isn’t in Churchill’s.

That’s why even the 50-1 War Decree is being quietly mooted as a more likely Ballydoyle contender than Ryan Moore’s mount but either way the scale of the task both Irish horses face is immense.

If either wins they will have proved themselves truly exceptional, worth every cent of whatever stratospheric stallion fee is eventually pinned to them.

Because while the defending champion Arrogate appears to have never recovered from an epic Dubai World Cup success in March that was a performance for the ages, his old rival Gun Runner appears to be peaking at the right time.

Arrogate’s trainer bob Baffert has three other starters and it is the rapidly progressive and appropriately named West Coast who could ultimately emerge as the Classic hero. Sky Sport Arena covers the Classic from midnight while all the Cup races are shown on the Attheraces channel.

O’Brien’s Del Mar team all run on the anti-bleeding drug, Lasix, including the defending Turf champion Highland Reel who is joined by Cliffs Of Moher and Seventh Heaven.

American turf racing always places a major emphasis on the post-draw but Del Mar’s turns are especially tight with Frankie Dettori quoted as saying he suspects anyone drawn higher than seven could be in trouble.

Even at a mile and a half, that could be the case which means Highland Reel’s run style, allied to a perfect stall three draw, could make him tough to peg back.

In contrast Rhododendron is 14 of 14 for the Filly & Mare, a race which sees Queen’s Trust and Lady Eli renew rivalry from last year although the French Oaks winner Senga could be a value alternative to them all.