Nichols Canyon can provide Mullins with sixth Morgiana in a row 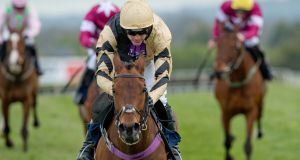 Ruby Walsh on board Nichols Canyon at Punchestown in 2015. Photograph: Morgan Treacy/Inpho

Dismissing Sunday’s Grade One Punchestown feature as a damp squib might be as inaccurate as it is unfair considering the current freezing weather conditions but the absence of both Faugheen and Annie Power has undoubtedly provoked a sense of anti-climax.

The first real onslaught of winter looked a perfect cue for the first appearance of one of Irish jump racing’s real superstars.

The prospect of the last two Champion Hurdle winners from the same yard, carrying the same colours and clashing in the same race was probably never a runner.

However, with Faugheen recovering from a foot bruise and Annie Power working badly during the week, neither will run at all, a blow to the €85,000 Stan James Morgiana Hurdle which has been robbed of much of its star quality.

“It’s bad timing, hopefully not anything more than that,” said Willie Mullins in reference to his superstar pair and the champion trainer indicated Fairyhouse’s Hatton’s Grace in a fortnight remains an option, although more likely for just one of them.

JP McManus was always likely to provide Mullins’s Morgiana opposition but circumstances have dictated that the legendary owner’s two hopefuls – Ivanovich Gorbatov and Jer’s Girl – now provide a challenge which is far from a semblance.

They take on a Mullins trio led by Nichols Canyon, the only horse to beat the magnificent Faugheen in last year’s Morgiana, and a notably admirable Grade One operator in his own right. In terms of star quality, though, even another Mullins mare, Vroum Vroum Mag, might have been a bigger draw.

Nichols Canyon though is likely to start as favourite to give his trainer a sixth straight win in the race and boasts a rating to justify it. He does, however, appear to be regarded as ultimately a World Hurdle type and did last run over three miles in May in a raid on a major pot in Nashville.

His stable companion Simenon has been a global traveller too in his time, including a fine fourth in a Melbourne Cup but his best days appear in the past so at this trip and in these circumstances it may be rash to dismiss Sempre Medici as a mere Grade Two talent.

Both McManus horses have won at the top-level but cut any way Ivanovich Gorabtov’s comeback effort at Naas was underwhelming while Jer’s Girl didn’t even get to make a comeback last weekend when denied a run due to a skin allergy.

Her best form last season was at 2½ miles, a factor which contributes to an intriguing weekend highlight even if it’s shorn of the some razzmatazz. Ruby Walsh has opted for Nichols Canyon and that could be the best signpost.

A total of 11 horses line up in the Grade Two novice chases with just two not part of an exclusive triumvirate of connections involving Gordon Elliott, Henry De Bromhead and Michael O’Leary’s Gigginstown Stud.

The odds indicate likely Gigginstown domination as Identity Thief can enhance his Arkle credentials in the Craddockstown Chase while Bryan Cooper looks to have picked right from an O’Leary trio in the Florida Pearl Chase. Disko has long promised to make a major impression over fences.