Monday’s racing at Fairyhouse cancelled due to overnight rain 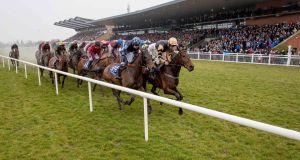 Monday’s racing at Fairyhouse has been cancelled due to overnight rainfall. Photograph: Morgan Treacy/Inpho

A 7.30am inspection was called on Sunday afternoon, because of forecast rain on ground already described as heavy.

It was announced slightly ahead of schedule on Monday morning that racing would not take place, following 15mm of rain.

It is still hoped, however, that day two of the fixture may go ahead on Tuesday - with a dry forecast and another 7.30am inspection planned.