Trainer is appealing after being fined €6,000 for the running of Churchtown Glen in Cork 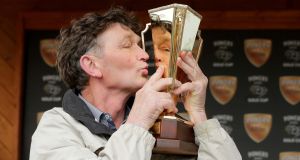 Trainer Mick Winters: “I welcome it in a lot of ways because it might open up the thing.” Photograph: Inpho

Trainer Mick Winters has said he hopes “common sense” can be applied at his appeal against “non-trier” penalties imposed on him at Cork on Sunday.

The popular dual-Galway Hurdle-winning trainer was fined €6,000 after a running and riding inquiry into his charge, Churchtown Glen, who finished seventh in a maiden hurdle at odds of 80-1.

Churchtown Glen’s jockey Barry John Foley was banned for 21 race days and the horse was suspended from racing for 90 days.

The penalties were the most severe imposed to date since the Turf Club’s new Rule 212 regulations in relation to “non-triers” were installed 10 months ago.

Winters and the horse’s owner, JJ Gordon, have appealed the fine and suspension while Foley has lodged an appeal against the severity of his ban. A Turf Club spokesman indicated the cases could be heard in Wednesday of next week.

Winters said he is looking forward to the opportunity to re-examine the case.

“We’re surprised how you can make such a decision in half an hour on a racetrack and I would like common sense to be applied to the whole thing,” he said on Tuesday. “I welcome it in a lot of ways because it might open up the thing.”

The Co Cork-based handler said Churchtown Glen is a talented horse but immature. He also pointed to Foley picking up suspensions for his use of the whip, including a four-day ban at Galway last month, possibly having a bearing on his riding of Churchtown Glen at Cork.

“I said at the inquiry that the jockey he’d usually use the stick a lot better or more vibrant. But he looked a fellah very insecure and if you’ve been pulled in so many times over the stick, you’d be afraid to use it,” Winters said.

A head-on camera shot showed Foley appearing to make minimal effort to ride Churchtown Glen out although Winters insisted he was very happy with the horse’s run in comparison to his previous start at Clonmel.

“I was delighted with our horse. Compared to Clonmel he did an awful lot right and the penny dropped with him half a furlong from the line.

“You’d have to say, looking at it for the general public and everybody, and in the best interests of racing, you’d like to be asked about it. The jockey explained and we explained ourselves.

“I’ve said this is a good horse. We’re not hiding anything. But he’s immature and the penny is taking a long time to drop,” he said.

Winters appeared shocked by the size of the fine imposed on him at the weekend and appealed for “balance to the whole thing”.

In other racing news this weekend’s highlight, the Ladbrokes Troytown Chase, could see the Cheltenham Gold Cup outsider Acapella Bourgeois have his first run for champion trainer Willie Mullins in Sunday’s €100,000 feature.

Mullins secured Acapella Bourgeois following Sandra Hughes’s retirement and the horse is one of 33 entries left in the Troytown.

Acapella Bourgeois was a 32 length winner of the Ten Up Chase over Navan’s three miles last February and he is as low as 16-1 in some ante-post lists for Gold Cup glory next March.

Mullins landed last month’s Munster National with Total Recall, another horse owned by the Slaneyville Syndicate and moved to him from Hughes. Acapella Bourgeois was quickly installed as a 3-1 favourite to make a winning first start for his new trainer.

Gordon Elliott has won the Troytown for the last three years and has eight possible starters this time, including the Kerry National winner, Potters Point.

“We’ll have plenty of runners in it, maybe six or seven but I suppose General Principle might be one of my main ones. Mala Beach is another for it,” Elliott said.