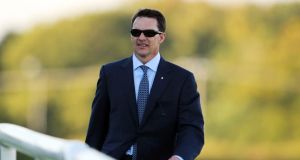 The half-dozen runners in tomorrow’s PW McGrath Ballysax Stakes may not immediately scream potential Derby winner but if Battle Of Marengo can successfully concede weight all-round it will be a major feather in his potential classic-cap.

Leopardstown’s Group Three feature has a history of throwing up future superstars. Two of Aidan O’Brien’s three Epsom Derby heroes, Galileo and High Chaparral won here. So did Fame And Glory and Yeats.

But the challenge facing O’Brien’s number one hope now is illustrated by how the one time Sinndar got beaten in his illustrious career was when trying to concede a Group One penalty in the Ballysax.

Battle Of Marengo has a Group Two penalty for landing the Beresford last year. He is joined by his stable companion Foundry today and a couple from Jim Bolger’s yard as the in-form trainer chases a record eighth Ballysax victory.

But it could be the 5lbs Battle Of Marengo concedes to the wide-margin Eyrefield winner Sugar Boy that provides a line to his future classic chances and his place in the Ballydoyle pecking order.

Mars was all the rage in the Epsom ante-post market yesterday. But his stable companion is clearly talented too, having overcome a slipped saddle on his last visit to South Dublin.

“He’s a lovely moving horse and the day he won in Leopardstown last year on good ground, my saddle slipped, I couldn’t push him at all in the straight and he still broke the track record,” said Joseph O’Brien.

Form horse
“Seamus (Heffernan) was very impressed with Foundry when he won so hopefully he’ll run a nice race on Sunday as well, but Battle Of Marengo is obviously the form horse,” he added.

Johnny Murtagh has been riding almost exclusively horses from his own Curragh yard so far this season but has a couple of outside mounts tomorrow, including Pop Art for Charles O’Brien in the Group Three 1,000 Guineas Trial.

The 110,000 Guinea purchase was 25 to 1 on her Naas debut last year and overcame a very slow start to beat a couple of Coolmore fillies, including the highly-promising Moth.

Pop Art is the sort of big filly to improve with time and faces a big ask here against eight others who include the Birdcatcher winner Snow Queen and John Oxx’s What Style who beat the Ballydoyle hope here on her debut.

Murtagh’s English-Irish Lincoln winner Sweet Lightning is weighted to beat Declaration Of War in the Heritage Stakes but ratings may not tell the full story. Declaration Of War arrived with a big reputation from France last year and had three starts for Ballydoyle towards the back-end of the season.

He is clearly held in some regard with plenty Group One entries later this season and can prove to be another Ballydoyle horse capable of successfully conceding weight.

A big reputation also surrounds The United States who goes in the 2,000 Trial and sports first-time cheek-pieces. As low as 16 to 1 for the Derby, The United States beat Dibayani by just a head on his debut at the Curragh last season.

Jim Bolger’s Move To Strike made his debut on this day last year, broke his maiden by nine lengths but then failed to justify favouritism in the Chesham at Royal Ascot. He looks one to check out.

Similarly with Ozeta in the final handicap. A Listed winner in France in 2011, she failed to really fire over jumps for Nicky Henderson and also when switched to “Boots” Madden here. But a fine run over an inadequate trip in the Lincoln last time was much more like it. She has slipped slightly in the ratings from her French peak and could make her first handicap start on the level a winning one.

1 James Ryan returns to the Leinster fold for Benetton clash
2 Will Addison starts as Ulster face crunch Bath showdown
3 Ralph Hasenhüttl: Shane Long at the heart of Southampton revival
4 Matt Williams: No easy way to earn your spurs as a top coach
5 James Lowe relishing the work, rest and play of his Irish rugby adventure
Real news has value SUBSCRIBE