Elliott chasing four in a row in Fairyhouse feature on Saturday 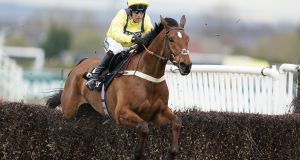 Lostintranslation is likely to go straight for the Cheltenham Gold Cup in March after his disappointing run in the King George VI Chase at Kempton over Christmas.

The Colin Tizzard-trained star was pulled up before the third last in the King George and has subsequently had a soft-palate operation.

Prior to that he had been impressive when landing the Betfair Chase at Haydock and connections are still targeting ‘Blue Riband’ glory although they’re unlikely to test him beforehand.

“We’ve just gone easy with him and he’s had his flu jab. There’s nothing that has particularly come out of the race that would say that is the reason [for the run].

“He had an off-day. Whether Haydock took more out of them than perhaps we though it’s hard to tell but all his work leading up to Kempton was very good and we couldn’t have been happier,” Tizzard’s son and assistant, Joe, said.

“It would be nice to point him at something and say that was the reason but we haven’t got that. So we’ll freshen him up and I don’t think we’ll run him before the Gold Cup.

“We can do plenty at home and just maybe take him for a couple of racecourse gallops and freshen him right up for March,” he added.

In other news, Curragh trainer Martin Brassil will hope his Cheltenham Festival-winning star City Island can get his career over fences back on track at Punchestown on Sunday.

After a number of jumping errors last season’s impressive Ballymore Novice Hurdle winner was pulled up on his chase debut behind Melon at Leopardstown over Christmas.

That was in a Beginners Chase but Brassil has opted to give City Island an entry in Sunday’s Grade Three Killiney Chase.

He is among nine entries left in the race after Tuesday’s forfeit stage with the Willie Mullins-trained pair Bapaume and Carefully Selected also featuring.

“Everyone has a different reason for why he ran like he did over Christmas,” Brassil reported. “I’ve been happy enough with him since anyway.”

The first six-figure contest of 2020 takes place at Fairyhouse on Saturday with 18 possible starters still in the reckoning for the €100,000 Dan & Joan Moore Memorial Handicap Chase.

Henry De Bromhead’s Grade One winner Ornua tops the weights with Getabird next in the ratings. Gordon Elliott can call on the last two winners of the race, Doctor Phoenix (2018) and last year’s victor, Duca De Thaix.

Elliott is chasing four-in-a-row as he was also successful in 2017 with Ball d’Arc.

His great rival Willie Mullins last won the race with Turban in 2014 and has the option of running Blazer in addition to Getabird on Saturday.

Elliott currently leads Mullins by over €300,000 in the trainers’ championship having secured over €2.7 million in prizemoney to date in Ireland this season.