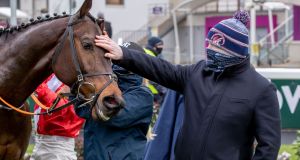 The six month ban to Gordon Elliott was announced just before Friday’s six o’clock news but in many ways the punishment was immaterial. In the Era of Outrage, the verdict was in as soon as the infamous photograph was released, for reasons unknown, into the public domain, just before the build up to Cheltenham. Irish racing will now hope to move on. Elliott has issued a contrite statement and will now go quiet, hoping to pacify the significant vocal army who would have wished him banished, disgraced, never to be heard of again. It has been a week of reckoning for Irish horseracing.

“What is it about this time in history that makes us want to destroy someone?” wondered one lady, calling into Joe Duffy’s Liveline show on Monday just as the debate was revving up towards general hysteria.

Yes, the image is self-evidently unpleasant and clearly never meant for public consumption. If Gordon Elliott had wished to plant a bomb under his own livelihood and reputation, he couldn’t have chosen a defter method. The image of a jaunty horse bloke, v-signing while sitting astride a recently deceased horse is a bleak distortion of the world of elite horse breeding and training.

Nobody should doubt the claims of the hundreds of people who have declared themselves sickened and haunted by the photograph. Human beings love animals with an uncomplicated totality which they rarely extend to one another. Everybody is entitled to their disgust and upset, if that is what they feel. But there has been a bloodlust for revenge on Elliott which, from this distance, seems shrill and suspect.

The general disgust transferred from the social media sphere to Government circles. For instance, did Jack Chambers, minister for sport, fully reflect on his feelings before announcing on radio that the image left him “shocked, horrified and appalled”?

Really? Perhaps. But men have returned from tours of Flanders post-1918 with less psychological baggage.

Horse racing is in many ways about aesthetics. Horses are beautiful creatures. You pass one in a field and you can’t but admire the helpless grace and nervy sensibility and the kind of unknowable quality. Horses are the stuff of books and film and, of course, sport.

Even if you have no interest in the sport of racing, the chances are you have seen this Grand National or that Gold Cup and were at some point struck by the sleek power and gorgeousness of a thoroughbred in full flight. Admiring the ideal of the horse in flow is just part of the culture and it is particularly prevalent here in Ireland.

For all the wrong reasons, this photograph is going to become part of the instantly recognisable images of horse racing culture. It won’t and can’t disappear. But if you go past the surface shock, it opens up an aspect of that world which the public is rarely forced to contemplate.

The photo begged immediate questions. Who took it and why? Who was the horse? What was its name? Had it expired right there on the track? And how? And what happens then? How do you physically remove a dead animal of that size from the place where it has fallen? One imagines that that is not a delicate procedure. And one wonders to what extent ‘respect’ for the animal’s remains is the guiding procedural force in that removal.

Also, where do horses ‘go’ after they die? What becomes of those beautiful creatures? We may like to believe that they rest under the apple tree with the sun forever setting over the fields where they spent their happy days. Some undoubtedly do. Horses that are family pets probably do.

And the world’s famous race horses have conspicuous resting spots – Red Rum at the finishing post in Aintree; Kauto Star’s ashes under his statue in Kempton; Arkle’s skeleton on display (an iffy sort of tribute, in my book). But what of the thousands of race horses who never won or who were killed before they had a chance to? In 2018, Horse Racing Ireland released the figures for ‘equine fatalities’ over the previous six years: 779 horses killed, 562 at racecourses and 217 at point-to-points.

Unlike the public, those who work with horses are accustomed to seeing those animals die, often suddenly. So surely, it is entirely reasonable to believe that people involved in horse racing – trainers, yard staff, jockeys, owners – can care deeply about the animals and provide the best of living conditions while remaining completely practical about their dying.

I contacted a friend, an out- and-out animal lover, who knows the world of horses and yards who confirmed that in any yard she had ever visited or worked, the horses were treated royally. She replied: “I know that horse would have been mourned by those who looked after it.”

That seems sensible: that the staff who mucked out, fed, walked out and groomed the horse – who spent hours caring and tending in the most mundane way – might have a closer bond than the actual trainer, whose chief interest is in getting it to race from A to B in as short a time as possible.

The extent of Gordon Elliott’s sentimental attachment to the horses under his care is a matter for his own conscience. Maybe he privately laments the memory of horses he trained for years after they die. Maybe he dreams of them. Or maybe he becomes indifferent to them seconds after they draw their last breath. The notorious photograph flies in the face of any argument he might make and in any case, the outrage will drown it out.

But be clear: owners were not sending their horses to Elliott because they believed that he ‘loves’ horses more fiercely than any other trainer out there. It’s because he turns them into winners and his success generates millions of euro in a hugely competitive sports and gambling/entertainment industry.

I know nothing of Gordon Elliott besides what most of us might have heard or read. His story of emerging from a non-horse training background to break into what is an obscure world, moving from jockey to apprentice trainer to owner of a multi-million euro training operation, is impressive. He’s only 43: a youngster in the land of racing. But that story has nothing to do with this scandal which has engulfed his reputation and his operation. He’s already paid dearly and has been internationally shamed for his behaviour: his official sanction is surely secondary to the ongoing excoriation and coursing.

His pose in that photograph is dismaying. There is something depressing about what the image appears (and the reality may be more complex) to communicate: a cavalier and entitled indifference to the fate of the poor horse. But surely it is something smaller than a true outrage: rather, it’s an ugly and saddening reflection of the complex and unfair relationship between mankind and animal.

The honourable work of animal-rights groups aside, many of us choose to turn a blind eye to the conditions of our slaughterhouses – particularly if we enjoy meat and poultry for dinner. There is an understanding that horses are above the sort of treatment meted out to those animals: an unwritten coda that they are to be cherished and revered in western society.

The Elliott photograph stands as an uncomfortable expose of the limitations of that conceit: that for all the romance and epic races and earthy glamour and for all the genuine affection and respect and care for horses, there also takes place within the tough world of racing a cold moment of unsentimental appraisal, week after week, when the death of the horse is a commonplace occurrence, when the beast literally becomes disposable and when the mind’s eye of the industry immediately turns to the next race, the next winner, the next immortal.