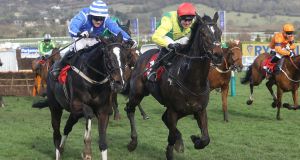 Paul Townend on Penhill lands ahead of Robbie Power on Supasundae on the way to winning the Stayers’ Hurdle at the 2018 Cheltenham Festival. Photograph: Inpho

Penhill became the latest big name to be ruled out of the Cheltenham Festival on Wednesday when Willie Mullins reported the horse to be “very sore” one day after an important piece of work.

Ironically, that news followed hard on the heels of the final set of entries being revealed, showing a record Irish-trained entry of 825 for Festival races, amounting to an unprecedented 45 per cent of all entrants.

Irish raiders are odds-on to win more races than the home defence at Cheltenham next month but Penhill will be unable to contribute as he has done for the last two years. The eight-year-old is notoriously fragile and has had just four races over the last two years, but two of them were victories at the Festival, in the Albert Bartlett of 2017 and the Stayers’ Hurdle 12 months ago.

Mullins gave a clear warning of what could happen at his media day last week, when he reported Penhill on course for the Stayers’ but added: “Every day with him, you’re looking at him every morning to make sure that he’s all right. So far, so good. But he’s going to have a few more searching bits of work between now and Cheltenham.”

Penhill had been 6-1 second-favourite for the Stayers’. In his absence, Paisley Park tightened to 2-1 favourite, while Samcro is next in the betting. It was the second upheaval in the Cheltenham betting in the space of three days, following Monday’s news that Le Richebourg would miss the Arkle. – Guardian