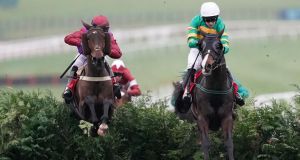 The 2-1 favourite looked beaten at the last when Jamie Snowden’s Fact Of The Matter jumped past him, but the 10-year-old relished the climb to the line and Walsh’s mount ultimately won going away by three-quarters of a length.

Bolger said: “That was great, he really knows his way around here and cuts the corners well. I thought we were cooked coming to the last, but he’s a great stayer and the nice ground helped him as well.

“I have to thank Mr [JP] McManus for giving me good horses, these races are so competitive now, the better horses are pulling out but we have a system at home that keeps them fresh and keeps them keen.”

Tiger Roll was on and off the bridle at stages, but began to get involved with half a mile to run.

Having run wide on the final turn, Elliott’s National winner stayed on nicely into fourth.

Elliott said: “It was a lovely run, Keith [Donoghue] just said he was a little bit rusty and had a couple of blows – I thought I had him a bit fitter, but it was his first time on the track since the National.

“Obviously he’s getting a bit cuter at home, but I like the way he galloped from the third-last to the line.

“You’d imagine coming here in December and March off level weights, the races will be made for him. March will be his Gold Cup. That’s the first time he has jumped banks since last March. I’m very happy with him.

“March is more important to be honest [than the Grand National]. The chances of going back and winning another Grand National are very hard. If he wins for a fourth time at the Festival, it will be a dream come true.

“He will run in December, then go straight to the Festival.

“It’s great to get him out, people want to see these horses and we’re delighted he’s back in one piece.”