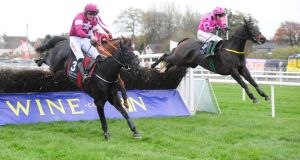 Despite sitting third in this season’s championship table Davy Russell is favourite to retain his jockey’s title and can eat into the gap to the leaders at Navan on Sunday.

The triple-champion jockey trails the current leader Paul Townend by 14 winners (55-41) with Rachael Blackmore on the 50 mark.

With the winter campaign starting to kick into top gear however, Powers make Russell an 11-10 favourite to win again. Townend is on 7-4 with Ruby Walsh a 3-1 shot and Blackmore on sevens.

All of them are set to be in action at Navan where Russell can land the featured €45,000 Tote Fortria Chase on Doctor Phoenix.

The ten grand buy proved one of the bargains of last season with a trio of valuable wins and a superb effort at Fairyhouse over Easter where he looked like defeating Un De Sceaux only to crash out at the second last.

With wet conditions finally arriving the ten year old could get the conditions he relishes at Navan and can secure a Grade Two victory.

Dortmund Park could be regarded as the outsider of Gigginstown Stud’s three Lismullen Hurdle contenders. But if conditions get testing the Grade One winning novice might be a potent test for all.

Russell wraps up his day on board Wonder Laish in a handicap hurdle for his old ally Charles Byrnes.

Considering he ran third off a flat mark of 93 in last weekend’s November Handicap, Wonder Laish could be thrown in here on 119. It will be just his third start over flights and last year’s maiden hurdle success at Listowel may have been just a glimpse of his jumping potential.

The flat season on turf is over in Ireland but Irish trainers will be heavily represented in the two Listed races up for grabs on the final day of the turf in Britain at Doncaster on Saturday.

Dermot Weld’s Bone Fide is joined by Aidan O’Brien’s Snowflakes in the Gillies Stakes. Four Irish runners, including O’Brien’s Irish Guineas runner-up Could It Be Love, line up for the Wentworth Stakes.