Jezki and Our Conor set for BHP Champion Hurdle 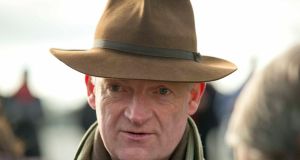 And if that task wasn’t intimidating enough, Willie Mullins appears not to have ruled out pitching in a “young-pretender” of his own against the odds-on record-breaker.

As expected the trio that dominated last month’s Ryanair Hurdle are again in line to contest the €110,000 weekend highlight after yesterday’s five-day entry stage. The only horse to come out was Hurricane Fly’s stable companion Thousand Stars. But intriguingly, two others, Un de Sceaux and Annie Power, have been left in by Mullins.

Both horses are unbeaten, are priced at 10 to 1 for the Champion Hurdle at Cheltenham in March, and were one of them to appear against Hurricane Fly & Co on Sunday it would add spice to an already eagerly-anticipated contest.

“I doubt if all three of them will run,” said Mullins. “Hurricane Fly will run in the Champion Hurdle and I don’t think the three will run.”

That suggests Hurricane Fly could yet possibly be joined by one of his stable companions, although Annie Power appears to have a more likely weekend objective at Doncaster on Saturday in the Grade Two OLBG Mares Hurdle.

If Annie Power does travel that could still leave Un de Sceaux as a wild card for Sunday’s big race. Unbeaten in six starts, and a wide-margin winner at Navan earlier this month, the French-bred has been steadily backed for Cheltenham despite not having appeared in a Graded race.

Ground conditions at the Dublin track yesterday were “yielding” and there was confirmation that the Champion will be run on the innermost hurdles course.