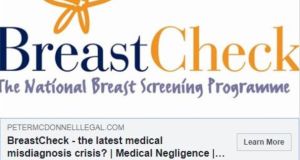 The CervicalCheck controversy has caused huge distress to hundreds of women, damaged the reputation of the country’s vital screening programmes and looks set to cost the taxpayer significant amounts of money.

But it also offers one group a potentially valuable revenue stream. Since the controversy first broke last April many medical negligence solicitors have been quick to advertise their services in the context of the alleged failings of the programme.

Many of these adverts appear to be in breach of the strict statutory rules governing solicitors’ advertising including a provision which bans ads making reference “to a calamitous event or situation.”

Other websites appear to be in breach of rules advertising “free consultations” or the taking of cases on a no-win, no-fee basis. Some use emotive language such as “horrific” and “nightmare scenario” which is also forbidden by the advertising code.

One promises to help “truly injured people get the highest compensation and best pay outs!” alongside a link to a newspaper article about Vicky Phelan, whose High Court case against the screening programme brought the subject to public attention in April. (Ms Phelan is represented by Cian O’Carroll Solicitors. There is no suggestion that this firm is engaged in any breach of advertising regulations).

The CervicalCheck controversy offers a lot of potential to lawyers. So far at least 32 people have lodged High Court cases and by some estimates as many as 3,000 women could be affected in some way by the issue.

The Law Society, which is the regulatory body for solicitors, operates the advertising regulations which are set in statute. The strict code bans a wide variety of advertisements such as ads that are “false or misleading in any respect” or ones “likely to bring the solicitors’ profession into disrepute”.

There are three reasons for the onerous regulations, according to a Law Society spokeswoman; to preserve the reputation of the profession, to protect the public and “to ensure that a level playing field is maintained across the profession.”

With the rise of social media, the Law Society increasingly has to regulate internet advertising which, according to one source in the society, “many solicitors don’t consider to be governed by the rules”.

In recent years Ireland has also seen a rise in American-style legal advertising seeking to generate personal injury claims, particularly against the HSE.

While still a long way from using US-style tactics such as garish television spots, many Irish solicitors are increasingly taking to Facebook to promote their work, particularly in the area of personal injury and medical negligence.

According to the Law Society’s guide on the regulations, social media posts and websites, with some exceptions, are still regarded as ads.

“For the avoidance of doubt, websites and all other forms of online marketing published via social media platforms are considered to be advertisements for the purposes of the legislation.”

Many of the posts related to CervicalCheck take the form of “guides” laying out the details of the controversy so far and what is likely to happen next before inviting readers to get in touch if they have any questions.

Others are more overt. One Facebook post from Cleary and Co Solicitors in Clonmel highlights the Government announcement of a redress scheme for those affected by the controversy along with their “extensive experience and knowledge” in the area.

Peter McDonnell Legal is one of most active legal firms online. One of its recent posts, titled “BreastCheck – the latest medical misdiagnosis crisis?” drew criticism on social media as being irresponsible (a related Facebook post has since been removed).

Elsewhere on its website the firm states it will take cases on a no-win, no-fee basis despite the fact that Law Society rules against this type of advertising.

On Wednesday the firm’s online marketing manager told The Irish Times it has reviewed its online activity and has made “changes to published material to ensure we are fully compliant with the Law Society’s regulations”.

A recent post by Byrne Carolan Cunningham Solicitors, which operates in several locations nationwide, talks about “the nightmare scenario” of a terminal cancer diagnosis before advising the reader to get “immediate legal advice”.

In response to queries, the firm said yesterday: “Any social media references to the CervicalCheck controversy were standard information pieces, sensitively drafted, in response to a very topical legal matter which was already firmly in the public domain.”

Advertising regulations allow for exemptions for articles which deal primarily with legal topics when they appear on a forum which has not been paid for by the solicitor, for example an opinion article in a newspaper.

Augustus Cullen Law cited this provision when contacted about one of its Facebook posts concerning the controversy.

When it was pointed out that a post on the firm’s website highlights the controversy as well as inviting people to contact its medical negligence department, partner Jamie Hart responded that if posts on solicitors’ websites were forbidden it would have been specifically mentioned in the regulations.

The legal profession, along with politicians and the media, has been criticised recently for stoking unwarranted fears about CervicalCheck, with some medical professionals worried all health screening programmes could be in danger due to a loss of confidence.

Chris Goodey, chief executive of the National Association of GPs, told The Irish Times some of the advertising is of concern as it fails to point out screening is an imperfect process and false negative results are a normal part of the process.

Fianna Fáil justice spokesman and barrister Jim O’Callaghan said victims of medical negligence are entitled to seek legal advice and bring claims but solicitors must ensure they “do not add to public concern and anxiety by using emotive and inappropriate language to generate claims”.

“Most women in Ireland will now be aware of the issues surrounding cervical tests and if they wish to seek legal advice they should contact a solicitor experienced in the area of medical negligence rather than one who uses the most visible form of advertising.”

The Law Society this week refused to comment on individual solicitors or advertisements but indicated it is aware of the issue. It said it has initiated an investigation into one firm whose website advertises its services in relation to CervicalCheck.

In general however, the society receives very few complaints relating to solicitor advertising, the spokeswoman said. She attributed this to the vetting service it provides to solicitors before they publish an advert.

As part of this it has already refused another solicitor permission to publish an advert in July in relation to CervicalCheck.

The strict rules on advertising have been criticised in the past as unfairly restricting competition and penalising small firms.

John Lynch, a solicitor in Clonmel accepted that a guide to the CervicalCheck issue on his website “probably” counts as an advertisement under the rules but believes that such rules are “draconian”.

“I’ve had them coming on to me about my website about five years ago and they listed a load of breaches. We then had to alter the site and alter our blogs,” he said. “The regulations almost cover any ad you could put up.”

Mr Lynch said advertisements should be controlled to make sure they’re factual and in good taste “but that control needs to be modernised”.