Strict protocols in place for festival including ‘Irish Zone’ for visitors 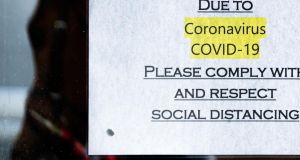 Irish racing’s regulator has confirmed one jockey has returned a positive test for Covid-19 in a series of testing for the virus ahead of next week’s Cheltenham festival.

The rider, who the Irish Horseracing Regulatory Board (IHRB) wouldn’t name, is self-isolating and is asymptomatic. His isolation period is expected to end in time for him to ride at Cheltenham.

Testing has been put in place for the up to 200 Irish jockeys, trainers and stable staff expected to travel to Cheltenham next week.

Negative tests for Covid-19 have to be provided by everyone travelling within 72 hours of departure. It is part of a strict set of protocols surrounding jump racing’s biggest meeting of the year.

“In preparation for the Cheltenham festival, the IHRB has conducted a series of Covid-19 testing and one rider out of over 30 riders tested has returned a positive test in the second round of testing,” an IHRB spokesman said on Tuesday.

“The rider is self-isolating and is asymptomatic. He has no close contacts related to racing and will have completed the 10 day self-isolation in time to take up his rides at Cheltenham. No other rider has tested positive at this stage.”

The timing of this particular positive result doesn’t appear likely to prevent travel but the outcome can only add to wider nervousness so close to the festival.

Also on Tuesday, Willie Mullins pointed to the extra “paperwork and red tape” involved in getting his huge team of runners to next week’s festival.

The champion trainer is set to have the largest team of horses for the festival at which he has had a record 72 winners in the past.

There will be no Cheltenham like this one, however, which will be held behind closed doors.

As part of the protocols a special ‘Irish Zone’ will be in place at the racecourse grounds containing accommodation and catering facilities with visitors from Ireland not permitted to leave that bubble.

Only grooms with runners on the day can enter the racecourse itself while no mixing with cross-channel based jockeys, trainers and staff is permitted.

Combined with the impact of Brexit on transporting horses it makes for a significant logistical challenge but Mullins is keeping his fingers crossed there will be no last-minute hiccups.

“It’s a lot of paperwork and a lot more red tape but it has to be done and it will be for the foreseeable future,” he said on Tuesday.

“A lot of the work is done and hopefully nothing will crop up at the last minute. It’s probably difficult for a person going with one horse but our people are used to it and they have a handle on it now. We think everything is covered.”

Prior to sending Grangee to run at Market Rasen in January, Mullins had expressed concerns about the VAT implications of travelling horses to Britain post-Brexit.

However, the transport of racehorses across the Irish Sea has largely gone without major difficulties since Britain’s departure from the European Union.

Mullins also indicated his Grade One- winning mare Colreevy is more likely to go to Cheltenham rather than take up an entry in this Sunday’s Grade Two mares’ chase at Limerick.

Colreevy is one of 11 entries left in the weekend event but Mullins said: “We’re edging towards going to Cheltenham with her but I will talk to connections. Paul Townend is looking forward to riding her if she runs there.”

Colreevy is a general 7-2 second favourite behind her stable companion Elimay for the new Mrs Paddy Power Mares’ Chase on the final day of the festival.

With Patrick Mullins forced to miss the festival due to the ban on amateur riders, Townend can also anticipate getting on board coveted mounts such as the bumper favourite Kilcruit and Billaway in the Hunters’ Chase.