Irish Gold Cup to go ahead at Leopardstown without sponsor 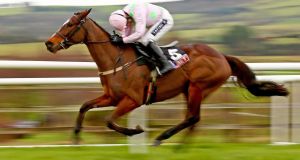 Run for 25 years as the Hennessy Gold Cup, the Edward Dillon distributing firm confirmed in May they were ending their association with a race which has been won by top horses such Jodami and Carvills Hill, and most notably has been secured on nine occasions by champion trainer Willie Mullins.

It was described last summer as a wonderful sponsorship opportunity as the race is the centrepiece of a card containing four Grade 1 races, the only one of its kind in Ireland, and is usually a target for many of this country’s prime Cheltenham festival hopefuls.

However the race, which was first run as the Vincent O’Brien Gold Cup in 1987, remains a potential sponsorship opportunity, and one which Leopardstown’s manager, Pat Keogh, is “very confident” will eventually be taken up.

“Ideally we want a ‘term’ deal, say from three to five years. That allows both parties to have a partnership because it is a big investment and I find a one-year arrangement can mean a company doesn’t commit the same resources.”

The Co. Dublin track will host a big handicap meeting this Sunday with the Coral Hurdle and Leopardstown Chase both €100,000 contests while the following Sunday sees a potentially mouth-watering clash between the Willie Mullins superstars, Faugheen, Nichols Canyon and Arctic Fire, in the BHP Irish Champion Hurdle.

The Mullins trio dominate a seven-strong entry, which also includes Tiger Roll, Plinth and King Of The Picts, leaving Henry De Bromhead’s Identity Thief as potentially the sole major challenger to the champion trainer’s team. Identity Thief, winner of the Fighting Fifth Hurdle at Newcastle, was runner-up to Nichols Canyon in a memorable Ryanair Hurdle clash at Leopardstown over Christmas.

Min’s stable companions Vautour and Douvan won the Grade 2 on route to Supreme Hurdle glory and the latest potential superstar owned by Rich Ricci cemented his position as favourite to do the same. “Min is fine after that and I doubt I will run him again before Cheltenham. I don’t think he needs to,” Mullins said. “I was very impressed he could pull so hard early on and still he was able to just ease right away.”