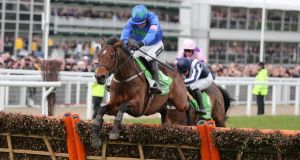 [BYLINE1]BRIAN O’CONNOR
[/BYLINE1][BYLINE2]at Cheltenham
[/BYLINE2]
Great champions find a way to win even when the going gets tough and although it mightn’t have been his most stylish victory ever, Hurricane Fly proved himself a true great by regaining the Stan James Champion Hurdle crown yesterday.

Only Comedy Of Errors had before regained the title and he managed to do so during a remarkable decade of hurdling excellence in the 1970s.

It is human nature for time to add a rosy nostalgia to such things, especially when names as evocative as Night Nurse, Monksfield and Sea Pigeon are added to the mix.

But time will also surely cause future generations to recall fondly how the 2011 champ Hurricane Fly yesterday beat off the 2012 winner Rock On Ruby in such dramatic style on the day that counts most.

What those generations may not pick up on though is how unlikely such a result seemed for much of the race.

In fact at halfway, a more likely scenario was that excuses would have to be found for why Hurricane Fly once again hadn’t shown his absolute brilliant best at Cheltenham.

Only third to Rock On Ruby a year previously, even his 2011 title victory came despite pulling so hard in the early stages that it seemed mildly miraculous that he had enough left to win.

Certainly, when Rock On Ruby powered into an early lead it must have seemed a potentially decisive move to those who’d plunged on the Irish superstar in the market.

[CROSSHEAD]Back straight
[/CROSSHEAD]Down the back straight, Ruby Walsh’s arms, normally immobile when Hurricane Fly is at his absolute pomp, were anxiously moving on the 13-8 favourite as it was left to Zarkandar, Countrywide Flame and Grandouet to track Rock On Ruby.

In fact it was a dramatic fall from Grandouet at the top of the hill that threatened to become the big talking point of the race.

But not for nothing is Walsh regarded by many professionals as the supreme big-race pilot of his generation. Hurricane Fly may not have been travelling with silky-smoothness but neither was he a beaten docket. And when it comes to judging the pace of a big race, Walsh remains supreme.

Whereas 12 months previously, Hurricane Fly’s trip down the hill was tortuous, this time there was a steady intent to his passage and when the cut-throat early gallop began to twitch at Rock On Ruby on the turn-in, his Irish rival ranged up alongside.

Even then, it was hardly a victory procession up the hill. Rock On Ruby never stopped trying and Hurricane Fly was all out, but at the line the victory was decisive.

“Guts, determination, stamina,” was Walsh’s summation of what won the day.

With “the Fly” it’s usually words like class, speed and style that are employed, certainly in Ireland. But great champions invariably have enough spit-in-your-eye grit to back up the sheen and that’s what was required yesterday.

“I wasn’t ever overly confident. From the word go he was never travelling like he can and he made a few mistakes. But what he has, along with all the class, is an unbelievably big heart for such a small horse,” Walsh continued.

Nevertheless, the suspicion remains that in three career visits across the Irish Sea to date, UK racegoers have yet to see the Hurricane Fly that official handicappers rate in the same figures league as the mighty Istabraq.

He won a trio of Champion Hurdles and Hurricane Fly was immediately rated as low as 3-1 to win the crown for a third time in 2014.

In the shorter term though it will be back to home ground at Punchestown next month and then a likely return to his old stomping ground in France for a new test in a new Champion Hurdle.

[CROSSHEAD]Bit quick
[/CROSSHEAD]The French version at Auteuil in June is over three miles-plus but Willie Mullins is happy he will stay.

“He settles much better now,” said the champion trainer. “You saw it today. He’s relaxing more with age. I thought they’d gone off a bit quick in front. I knew if they’d got Hurricane Fly off the bridle, they’d gone too fast.”

Since Mullins has already managed to win the French Champion Hurdle four times, it’s fair to assume he knows what is required at Auteuil. He certainly knows what’s required at Cheltenham. And yet even for the most successful Irish trainer ever here, there was no getting away how satisfied and relieved he was for the horse.

[CROSSHEAD]Still enough
[/CROSSHEAD]“I’m delighted he has justified his ability,” he said. “I wanted Hurricane Fly to show what he can do. I was worried at one stage, but I felt if Ruby hadn’t asked for everything, there was still enough there.”

In fact that’s the sum of Hurricane Fly’s status. Masters like Mullins and Walsh can still be surprised by him, even at this stage of his career.

It wasn’t achieved quite in the manner expected but Hurricane Fly now has legendary Cheltenham status.

And when it comes to National Hunt racing, there’s no greater accolade.

1 Seán O’Brien: Anger over my parents’ break-up never left me
2 Dan Martin back to third in Vuelta after a wet and wild Stage 6
3 Mayo relegated for first time in 23 years after pulsating Tyrone encounter
4 Hugo Keenan and Will Connors: The best of friends, the best of debuts
5 Ireland 50 Italy 17: Ireland player ratings
Real news has value SUBSCRIBE