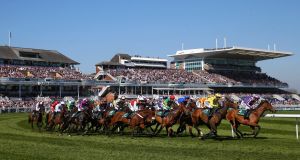 Friday week’s new Brexit deadline means the transportation of horses to and from Ireland to this week’s Aintree Grand National festival goes ahead as normal. Photo by Alex Livesey/Getty Images)

Irish racing’s ruling body has welcomed the provision of an extra Border Inspection Post at Rosslare port in the event of a no-deal Brexit.

Friday week’s new Brexit deadline means the transportation of horses to and from Ireland to this week’s Aintree Grand National festival goes ahead as normal.

However Horse Racing Ireland has warned of extra administration and costs involving the movement of horses from Britain to Ireland should the UK ultimately crash out of the European Union without a deal.

Although the political situation in Westminster means Aintree is unaffected, the new April 12th deadline means any no-deal scenario could have immediate implications for cross-channel horses competing at Fairyhouse’s Irish Grand National and at the Punchestown festival later this month.

EU authorities are expected to decide later this week on the whether or not the UK will get vital ‘Third Country’ status, without which horses won’t be allowed move between the EU and UK at all.

Even with such status all horses entering Ireland from Britain will still have to be checked at an EU Border Inspection Post.

Up to now the only ‘BIP’s’ were at Dublin and Shannon Airports. The Brexit crisis prompted the establishment of an inspection post at Dublin port and another BIP is now in place in Rosslare.

Technically the two port facilities have still to be officially ratified by the European Commission. However HRI’s chief executive Brian Kavanagh has said the extra BIPs are a welcome step in the event of a no-deal.

“The fact we potentially now have four Border Inspection Posts, including one in Rosslare-Euro port, is a big help. It’s all subject to ratification but we have to assume that will be okay,” he said on Monday.

Kavanagh pointed to recently published Department Of Agriculture guidelines that have been issued in the event of a no-deal scenario as evidence of how the thoroughbred industry here would be affected if the UK crashes out of the EU.

“Horses would have to undergo documentary, identity and physical checks at Border Inspection Posts here, with identification documents and completed export health certificates.

“That means a UK-based vet will have to certify a horse’s health status. So, for instance, if a horse goes to race in Britain, a vet at a racetrack will have to sign some sort of certificate to confirm the horse is in good health to re-enter the country.

“This is preparing for a scenario we hope will never happen. But this is where extra administration and costs come in. It means a lot of extra complexity and it’s not a good outcome,” he said.

Kavanagh added that current planning for no-deal is based on horse transportation between Britain and Ireland.

In terms of the Border with the North of Ireland he said: “As we saw with equine flu, the island is treated as a single unit for animal purposes and always has been. Technically a horse going to race in the North would be leaving the EU for a period of time. But that’s linked into future risk assessment.”

He added: “If there’s a crash out on April 12th these are the arrangements that will apply. It is very different from the current very smooth arrangement.

“If they don’t crash out, and they apply for an extension, or if the withdrawal agreement is ratified at the fourth time of asking, then we’re into a transition period and the status quo will be maintained. So we’re waiting for things to get finalised in Westminster in some shape or form.”

In other news, Irish jockey Fran Berry announced his retirement from the saddle.  The 38-year-old suffered spinal injuries in a fall at Wolverhampton in January and has been advised by his surgeon to stop race-riding.

Berry said in a statement: “For the past 23 years I have got to live out my childhood dream of being a jockey. But following recent scans and discussions with my medical team headed by my surgeon, Dr Mike Foy, as well as Dr Jerry Hill, I have to accept that the dream is now over and that due to the injuries sustained in Wolverhampton on January 29 I will not be able to return to race-riding.

“While this news is heartbreaking on one level, I am fully aware how lucky I am. Riding has been a fantastic adventure for me and I am very grateful for the way it allowed my family and me to experience the world and gain many friends over that time.”

Pathfork’s Group One success in the 2010 National Stakes was one of Berry’s career highlights. As an 18-year-old he also won at the Cheltenham festival on board the JP McManus-owned Khayrawani in the Coral Cup.