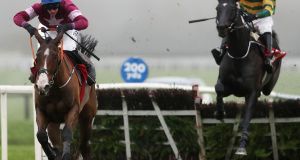 Mengli Khan ridden by Jack Kennedy (left) races clear of the last on the way to winning the Bar One Racing Royal Bond Novice Hurdle during day two of the Fairyhouse Winter Festival. Photograph: PA

Gordon Elliott and Michael O’Leary made history at Fairyhouse on Sunday with a unique Grade One Winter Festival hat-trick.

No owner, trainer or jockey had ever before won the three top-flight races on offer at the first major Grade One fixture of the National Hunt season in Ireland.

But a statistic which had survived since 1994 was blown away as Elliott supplied the Gigginstown Stud trio of Mengli Khan, Apple’s Jade and Death Duty to win in style.

Jack Kennedy did the steering on Apples’s Jade in the Bar One Racing Hatton’s Grace and Mengli Khan in the Royal Bond Novice, while Davy Russell was aboard Death Duty for the Drinmore Novice Chase.

Earlier in the week Michael O’Leary’s brother Eddie had described the chances of a Gigginstown top-flight clean-sweep as “zero to none”. But after the nearly 6/1 hat-trick, the Ryanair boss quipped: “Isn’t it great to be occasionally surprised!”

After running Willie Mullins so close in last year’s trainers’ championship no one is surprised to see Elliott again out in front of his great rival at the top of this season’s table.

Mullins secured a big money pot in Saturday’s Ladbroke Trophy – formerly the Hennessy – at Newbury on Saturday with Total Recall and scored in England again on Sunday when Benie Des Dieux won a Listed Chase at Carlisle.

However on home ground it was a resounding day to remember for Elliott who stretched his championship lead with a Grade One feat beyond even Mullins in the past.

Mullins had won two of the three premier pots on four occasions. But armed with three short-priced favourites Elliott made no mistake with the hat-trick.

“This is what it’s all about. Winning three Grade Ones on one day is unbelievable, a day you dream about. It’s a local track as well, like Navan, and they seem to be lucky for me,” said the Co Meath-based trainer.

Inevitably, Elliott was quizzed about last season’s title duel with Mullins and admitted to being heartbroken by the defeat, having been in the lead for so long.

“It was heartbreaking, to get so far, and all the press and hype,” he said. “Willie is an amazing man.”

However, Davy Russell caught much of the Fairyhouse mood on Sunday when he described it as “Gordon’s day”.

The former champion jockey added: “Willie is so good and puts the benchmark so high for these trainers . . . but Gordon is the up and coming youth of the game which is great to see.”

“It’s the first time in 15 years my brother has bought me a two-mile hurdler and he’ll probably never jump a fence!” joked O’Leary, whose priorities are usually focussed on fences.

However, the strength in depth among Gigginstown’s novice hurdle team was indicated by Elliott’s declaration – after the evens favourite proved over five lengths too good for Early Doors – that Mengli Khan will be kept to the minimum distance.

The classically-bred horse is 6/1 favourite for the Supreme at Cheltenham and Elliott said: “He could be better on better ground and is a two miler. Gigginstown buy big three-mile chasers. He’ll stick to two miles because if everything stays right we have a few nice horses for each of the categories.”

Whether Death Duty goes to Cheltenham or not is unclear since he didn’t enjoy his trip to last season’s festival. Nevertheless he is an 8/1 shot for the JLT and the RSA after a smooth success at odds of 8/11 .

“I might have been getting it wrong thinking he needed three miles. I imagine it might be the JLT if he goes to Cheltenham at all. There’s loads of races in Ireland and he didn’t travel over well last year and got very light. I probably shouldn’t have run him,” he said.

The 7/2 joint-favourite barely came off the bridle to win by 11 lengths over the marathon trip.

Earlier JP McManus’s potential Triumph Hurdle options increased again as Espoir D’allen won the Grade Three smoothly. He joins the owner’s English based hope, Apple’s Shakira, at the top of the betting for the Cheltenham race.