Going at Cheltenham the softest in over 20 years 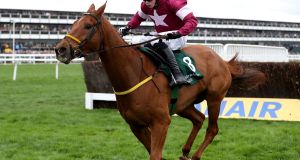 Road To Respect: Noel Meade is hopeful there will be decent ground at Cheltenham on Friday for his Gold Cup contender. Photograph: Dan Sheridan/Inpho

Cheltenham is set to start on the softest ground conditions the festival has seen in over 20 years.

The going at Cheltenham on Sunday was described as “soft” and heavy in places. More rain is forecast to fall at the track up to Monday evening. The last time the festival opened on officially soft going was in 1995.

Irish-trained horses have started arriving at Cheltenham, including Day One runners from the powerful squads of Gordon Elliott and Willie Mullins.

Although conditions are soft, some pleasant surprise has been expressed at how decent track conditions are with top English trainer Nicky Henderson reporting the ground as “soft for sure but a long way from being desperate”.

That will be good news for Irish trainer Noel Meade who is keeping his fingers crossed there will be decent ground for his Gold Cup hope, Road To Respect, on Friday.

“I wouldn’t worry about the weather with him as long as it didn’t get heavy. If it was heavy then I think it would become a big slog. I think reasonable soft ground would be okay,” said Meade who is hopeful Road To Respect will stay the Gold Cup trip.

“He stayed three miles well at Leopardstown (Christmas Chase) in what was a good gallop. I know in the last two and a half furlongs of the Gold Cup a lot of things change and some horses don’t actually stay.

“It would be very foolish of me to say I think he’s cast iron to say. I’m very hopeful he will but I wouldn’t say any more than that,” he added.

Dundalk hosts an eve of Cheltenham card on Monday and it could see John Oxx strike with his first runner of 2018.

Port Lions dons a first-time visor in this as he tries to end a frustrating streak which included being thrown out of first spot for a dramatic drift right at the track last month.